Out of this World Opal 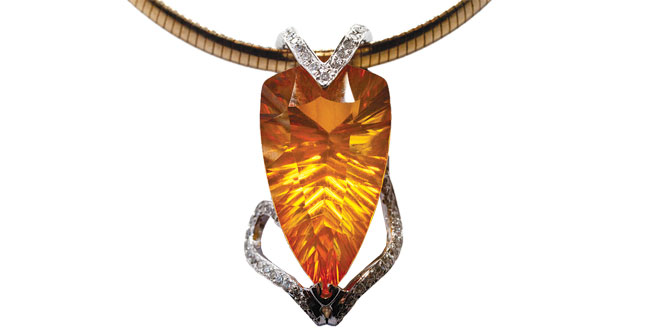 He knew it was out there; an opal that had yet to be discovered. For over forty years, Peter Piromanski successfully prospected for the opal gem in Coober Pedy in South Australia. This, after all, was the place to be to find opals of all shapes and varieties in the country, which, in fact, mines 97 percent of the world’s opal. Then, one day, while in the middle of nowhere in western Australia, not too far from Perth – an uncommon opal mining site – he stumbled upon it. The Australian Fire Opal.

As the story goes, Piromanski (a fitting last name to discover a fire opal), was actually searching out old ocean beds, when his truck – an old fire engine (again, appropriate to his name) – broke down in the middle of nowhere. So he set up camp. When he woke, the morning light shone down on his now extinguished fire, and reflections of red shot back at Piromanski. As he looked around, they were everywhere – sitting right on the surface, just waiting for someone to pass by and pick them up. So he did. Go figure Piromanski would find them in a fire pit.

He took his new findings to the Gemological Institute of America. The institute studied the gems for more than six months. Found by Piromanski in 2008, the opal “needs to settle once dug. If you don’t do it, it could easily break. It needs time to ‘air out.’ Some of these stones have been airing out for five years!” explains Jason Wallett, a gemologist on Marco Island who owns Down Under Designs. Originally from Perth, Australia, Wallett was lucky enough to have contacts through his gemologist training that introduced him to the Australian fire opal and Piromanski. They hit it off and now Wallett is currently the only jeweler in America that has the right to sell the gem, whether it be from 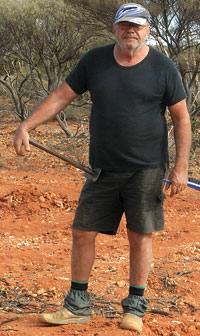 Peter Piromanski: the man who discovered the Australian Fire Opal.

his store or to wholesalers. Few places in Australia even have access to the gem as it is just coming onto the market.

This is good news for Wallett, as the GIA’s final report concluded that this gem, in deed, was a new discovery.

And a rare discovery at that. As Wallett explains “this is a different stone than the Mexican fire opal because (in its forming process) it goes from a liquid to a solid, then liquid to solid again, which increases the clarity of the stone. This has never been known to happen. They’re trying to find out why. They (GIA) believe it has something to do with an asteroid they know hit the area many years ago.”

This asteroid may have changed the process of the gem formation, may have had nothing to do with it or may have brought the stone, literally, from out of this world. Wallett says crystals found inside the gem were considered to be from an “unknown origin” according to the GIA, thus the interest in the asteroid.

Mexico, does indeed mine a beautiful fire opal gem, however, the two have been proven to be different as far as gems go, according to the GIA report. There is even an opal from Australia described as a fire opal due to its red specks. Again, this is not the same. The Piromanski fire opal is a one-of-a-kind find and gem.

This makes the it the latest and most intriguing gem on the market. “The stone is found in granite,” explains Wallett. “But there are no explosives used on the opal – it seems to have a grudge against them.” With the use of dynamite, the fire opal has been found to crack much easier. Instead, “all the digging is done by hand, pick axes and backhoes.”

Piromanski owns the rights to the fire opal, which after dug and set for six months, is then sent to a “cutter” who shapes

The Australian Fire Opal has been found in a variety of colors – from clear to fiery oranges and reds. SUBMITTED PHOTOS

the gem. It’s then sent to jewelers or distributors to build beautiful pieces of jewelry with it. The only jeweler these stones have been sent to in the United States is Wallett. Not only was he the first jeweler to get the stone, he was the first jeweler in the world to create a finished piece using the fire opal. Named the “Gamai Necklace,” it is made up of a 10.35 karat fire opal and 1.29 karats of diamonds – a total of 120 – set in 14 karat gold. The necklace comes with a slide and can be worn two ways. Wallett named it gamai after the Aborigine word meaning spear due to its unique shape.

Sitting pretty at Down Under Designs, the necklace waits to find its forever home. Wherever it goes, the owner will be the first person to buy the first one-of-a-kind Australian Fire Opal pendant ever made. It even comes with a certificate of authenticity. “I’ve never been a runner. I’ve never run a race in my whole life. But the first time I tried, I won and was the first in the world!” laughs Wallett in disbelief.

The single karat value is still being established, however, larger gems have had their prices set. A ten-karat or larger Australian fire opal is currently valued at $1,100 per karat. Which means the Gamai necklace fire opal stone is valued at more than $11,000. That’s just the fire opal.

Wallett has an array of Australian fire opals which also come in a menagerie of colors, ranging from clear to gold to bright red. All of these are also awaiting settings and homes. See the oddity and the beauty that is the Australian fire opal at Down Under Designs, located at 994 N. Barfield Drive, Unit 39. For more information call 239-248-2853 or visit downunderdesigns.org.

To learn more about the Australian fire opal, its discovery and to read the GIA report on the gem, visit www.piromanopal.com.au.