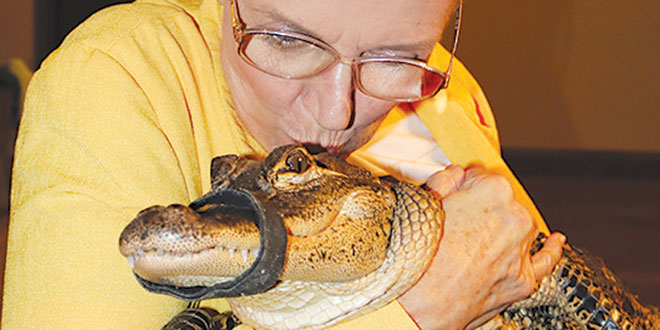 Barbara Johnson shows her appreciation for our wild life.

Literally, just outside our doors is a world foreign to many; a vast wetlands we call the Everglades. Thanks to Bob McConville, this world becomes a little less unknown. Bob is a Master Naturalist and shared some insight with us on April 23rd at the Rose History Auditorium.

Through pictures, stories and fun facts, Bob let us know quite a bit about the wildlife around us. The breadth of his knowledge is vast and there is so much to impart about his talk. We have limited space here so let’s explore just a few of these fun tidbits in abridged form (Bob’s facts, my words).

After filling the crowd with some great information about Florida wildlife, a few of Bob’s friends approached the stage. 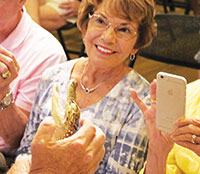 Gator Mike shows an audience member what a young alligator looks like up close. Other audience members protect themselves with small, rectangular shields.

Much to the delight of the crowd, Wooten’s brought two alligators for some show and tell. The first was a two-year old and still light in color. The other was a four-year old. Both were handled by Gator Mike who brought them around so the crowd could feel their skin and explore the scoots and other features of the animals. It was an interesting and unique way to spend the evening.

Wooten’s Animal Sanctuary and Airboat Tours is located on Highway 41 about 2 miles south of the Highway 29 intersection. It’s a great destination and worth the trip (wootenseverglades.com).

Bob McConville, besides giving amazing talks and presentations, is owner of Stepping Stone EcoTours (steppingstoneecotours.com), and a Naturalist aboard The Dolphin Explorer. Bob also writes a column here in the Coastal Breeze called Stepping Stones. One thing you’ll learn from reading his column, among other things, is that Bob loves his wife very much.