Orion Looms Large in the East 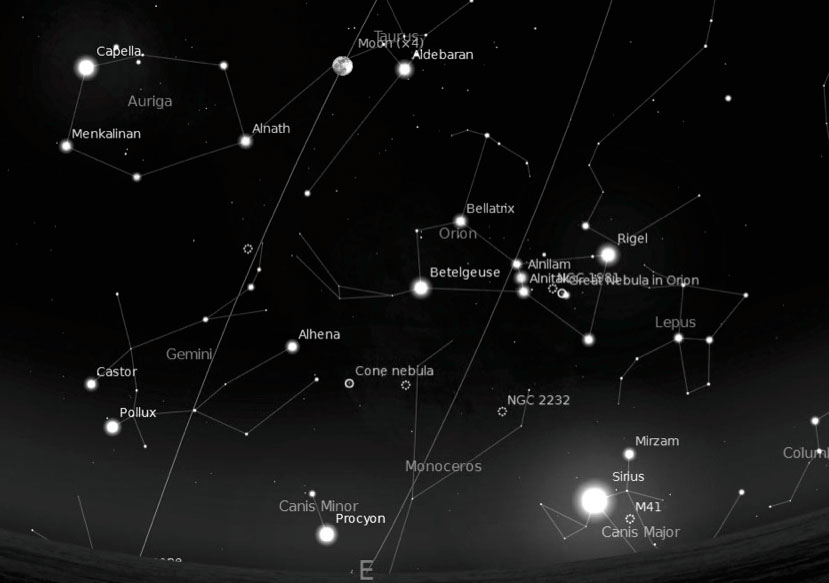 
Tonight, Orion the Hunter, rises above the eastern haze in the middle evening; kneeling upon Lepus, the hare and facing Taurus, the Bull with shield and club. Probably Orion is the most easily recognized constellation in the sky after the Big Dipper (Ursa Major) and easily visible in almost every inhabited spot on Earth. It is difficult to see in Antarctica as the Sun is above the horizon when Orion is at its highest. On Marco, it will rise very high in the sky until parts of it are almost overhead affording us an excellent view.

Although Orion does not touch the ecliptic, it is so close that planets can pass through its most northerly regions occasionally as Saturn did a few years ago and the Moon did last month.

Orion is a handy guide for novices in locating nearby stars; the ones given below are bright enough to be seen in the nearly full Moon. Draw an imaginary line through the belt stars and extend it downwards (or leftwards when Orion is higher) and you will find Sirius. Extend the line in the opposite direction and you will locate Aldebaran. Draw a similar line through the shoulder stars of Betelgeuse and Bellatrix and extending it downwards (or leftwards) to find Procyon. A diagonal line starting at Rigel and passing through Betelgeuse will wind up in the vicinity of Castor & Pollux.

There is a Lunar eclipse on December 10 which might be mentioned in the news, but there is no point in getting up early to see it. The eclipse will be a non-event for Marco Island, although west of the Mississippi people may see part of it. Only observers in Alaska and points westward will see the eclipse in its entirety.

On December 13 & 14 there is the annual Geminids Meteor Shower, although the Moon will interfere with viewing the fainter meteors. Look at the constellation Gemini after midnight to see up to 60 multi-colored meteors per hour.

Mr. Usher is President of the Ever- glades Astronomical Society which meets every second Tuesday at 7:00PM at the Norris Center, Cambier Park, Naples.