Orion Leaps into the Sky 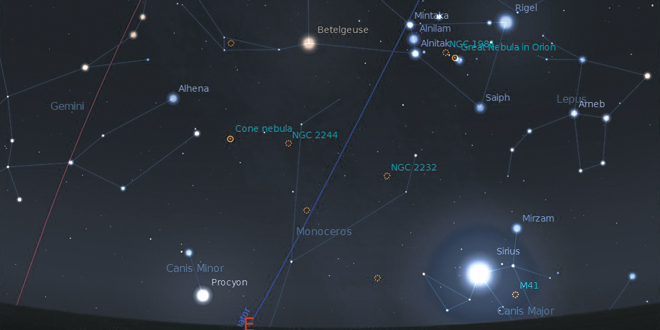 There is a lot to see in the eastern sky tonight! Both naked eye and binocular stargazers will be kept busy enjoying the sights nature is presenting this evening.

Orion the hunter, undoubtedly one of the most recognized constellations in the world, is rising in the east. Many of the bright stars in this region of the sky are loosely related to each other, being members of what is called the Orion OB1 Association – a sort of loose cluster that is no longer gravitationally bound together. The stars of the belt and sword are all members with Betelgeuse and Rigel being possible outliers.

Bellatrix was once thought to be a member of the association as well, but this is now thought not to be correct as it is much closer to Earth than the other stars. This blue-white shoulder star in Orion may now be better known to youngsters as the namesake of an evil character in the Harry Potter series. The Latin name can be translated as “female warrior” and that indeed was the function of the character in the books.

Saiph serves as the right foot of Orion and has a rather unusual property. It is about as far away as Rigel and of a similar size but appears noticeably dimmer. This is because Saiph’s surface temperature is so hot (46,000 deg. F) that most of the light emitted is in the ultraviolet range and invisible to the naked eye making it appear dimmer.

Orion has a rather useful property for beginning stargazers – it can be used to locate other stars and constellations. Extend the line formed by the belt stars to the left and find Sirius – the brightest star in the sky. Go the opposite direction and find Aldebaran in Taurus. Draw an imaginary line from Rigel through Betelgeuse then extend it until you reach Castor and Pollux in Gemini. Finally, extend a line from Bellatrix through Betelgeuse and locate Procyon in Canis Minor.

Even naked eye stargazers see the fuzzy area in Orion; binocular users will find the middle star in Orion’s sword is actually the giant Orion Nebula – a birthplace of stars. A few stars are visible in the misty area, but perhaps a thousand are still hidden.