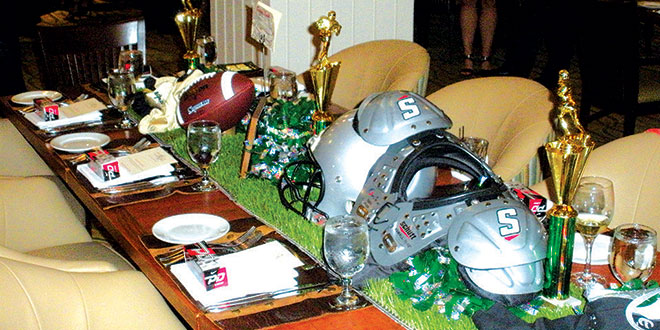 The sports theme of “For the Love of the Game” carried over the dining décor.

The role of athletics in the physical and character development of young people was celebrated with elegance and enthusiasm at the Optimist Club of Marco Island’s “For the Love of the Game” winter sports soiree.

Held recently at the Marco Island Marriott Beach Resort’s The Rookery at Marco Golf Club, this was the first year for the event, which included silent auctions and raffles, live music and dinner. “For the Love of the Game’s” debut was a successful one, according to Optimist Club President Meghan Bonos, who said more than $15,000 was raised, after expenses.

“That is amazing for our first time because we’ve never had a fundraising event of that magnitude for the Optimist Club,” Bonos said of the fundraising total. “It was a gathering of the community

Michael and Ann Meehan, of Fiddlers Creek, check out some auction items. PHOTOS BY DON MANLEY

to honor the celebrities and also the future athletes. While the fundraising component is important to us, what really warmed my heart was seeing the number of people coming together to celebrate the future athletes of Marco Island and learning more about the ways they can support the Optimist Club.”

The Optimist Club provides flag football, basketball and soccer programs, as well as a travel soccer team, and there are plans to add golf and cross country programs in the near future. The programs are available to children between the ages of 3 and 14.

Proceeds from “For the Love of the Game” will go toward establishing an endowment fund for academic scholarships for graduating high school seniors who participated in Optimist sports programs, financial aid for some needy participants, and 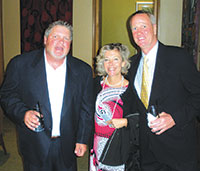 Kruk and Dorenbos told the audience programs such as those of the Marco Optimist club are vitally important to young people. 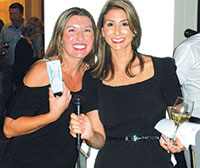 carries over into life,” he added.

In her remarks, Bonos also point to organized sports’ value as a character builder for youngsters. “Sports touch you in ways that are intangible, that you can’t find in a playbook,” she said, citing self esteem, determination, confidence and the development of leadership skills as a few positive byproducts.

Bonos said during her tenure as president, she is also concerned with building not just great sports programs, “but also a great community organization so there’s a strong support network behind the kids.” She has been working to foster closer relationships among parents of participants, and also the participants themselves.

For more information about the Optimist Club of Marco Island, visit www.marcooptimistclub.org.