Optimist Soccer Grows to 300 Thanks to Parent Volunteers 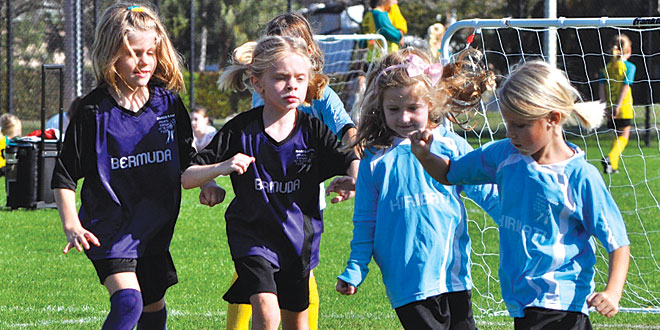 The Optimist Club of Marco Island was formed in 2008 to make organized sports accessible to a wide range of children’s ages and abilities. The fee to sign up a child is $40 and the uniforms and part of the equipment is sponsored. This season, the soccer team added 100 new kids to the program, bringing the number of participants to nearly 300 in the soccer program alone. The Optimist Club also provides football, cheerleading and basketball throughout the year. The secret behind the program’s success is a group of dedicated parents who roll up their sleeves every week to lead the

practices, organize the games and cheer the kids on.

The club’s mission is to “provide the best possible training, in a safe, fun, family-oriented environment while teaching lifetime values and creating long-term memories.” Chadd Chustz is the director of the soccer program this year, and he says the program’s success hinges on parental involvement. “Every week, I am amazed by the number of parents and siblings who volunteer their time, money and talent to help coach, support and cheer on our 31 soccer teams of kids. Many hands make for light work, and this

program would not exist without Marco Island’s community spirit.”

Willingness to help carries the club farther than sheer expertise. Chustz himself is a parent of three children, all under the age of five, and when he “put up my hand to help, voila, I was the director of soccer.” He also coaches his son’s pre-K team, which he enjoys “because it’s all about the fun at that age.”

Deborah Hobbs started out as a parent on the sidelines but soon found herself coaching her daughter Elizabeth’s Kindergarten/1st grade team. She has no previous coaching experience 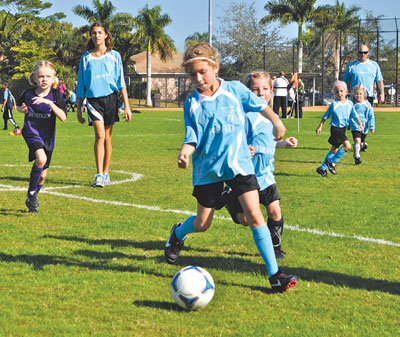 but nonetheless leads a group of five and six year old girls through their drills patiently and capably, somewhat to her own surprise. She explains, “If my own children and the other kids on the island are going to be involved in sports or any activity, I want it to be the best experience possible. So, when they were short coaches for K-1 girl’s soccer I decided to volunteer. It’s been a great experience and I have my parents and coaching mentor (Jim Watt) to thank!” 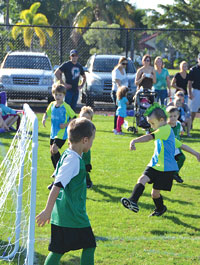 Island businesses, many of them parent-owned, picked a soccer team to sponsor, thereby also giving them ‘naming rights’ in keeping with this year’s theme: Island World Cup. Cindy Roloff is the owner of Marco Island Craft and Shell in Town Center Plaza. She was excited to be asked to sponsor and chose Bermuda for the team’s island theme. “I was very happy to be able to help out. It’s such a great program for kids. Besides getting to own my own sports franchise, getting naming rights to my daughter’s team was the next best thing!”

To learn more about the Optimist Club of Marco Island, register or sponsor, visit www.hometeamonline.com/mioptimist.