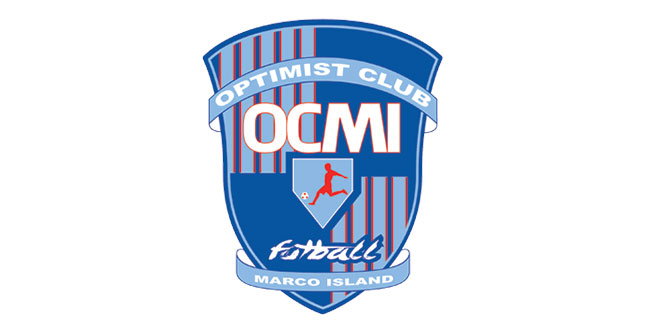 Lyndsi Koszo and Meghan Bonos are the ultimate soccer moms. Three months ago, the two Marco Islanders — with the support of the Optimist Club board.

“We both have a passion for youth sports having grown up playing on various teams throughout our lives,” explains Lyndsi. “We recognized the need in the community for a comprehensive soccer program, focusing on core soccer skills with an emphasis on teamwork, character development and having fun at the same time. The Optimist program embodies these core values. It was a natural fit for us to volunteer to help them re-build soccer for Marco Island and establish an energy for the game amongst the youth, families and businesses within the community that they could be excited for and proud of.”

To be sure, the women have the athletic and organizational backgrounds to get the job done. Lyndsi and her husband, Adam, own three publications in the St. Louis, Missouri, area. Lyndsi also coaches competitive cheerleading and power tumbling at the Mackle Park Community Center. She and Adam have three children — Vayda, 16; Oliver, 13; and Sydney, 7.

Meghan and her husband, Tom, are often seen on the soccer field at Mackle Park with their 7-year-old triplets — Thomas, Wyatt and Christopher — 5-year-old son, Jackson, and 3-year-old, Grace. Both Meghan and Tom have been active coaches and volunteers in the Optimist organization since arriving to Marco Island in 2012.

Since taking over, Lyndsi and Meghan have secured Florida Youth Soccer Association (FYSA) certification for the Optimist program, have created a core administration team of well-known coaches from the Marco community that they know both kids and parents respect, and completely redesigned the program.

A non-profit, educational organization, FYSA and its affiliation gives the Optimist Club the tools it needs to make a truly professional, state-of-the-art club. Optimist is the only club on Marco Island able to provide a competitive platform for the advanced soccer player to register and attend FYSA sanctioned events.

“This is a huge win for all young athletes and parents who want their kids to have a path for growth from the toddler years of soccer to the competitive level they reach in their early teen years. This is also a huge win overall for the soccer enthusiasts of Marco Island,” says Meghan.

The administration group adds to the depth chart. Patrick Baldwin is in charge of competitive programs, and Adam Kozso heads up the referee program and marketing. Adam Campkin and Tom Bonos run recreational programs. All of the men have played soccer at the collegiate or semi-professional levels. In fact, Tom was captain of the Division I, Lehigh University soccer team, leading the team to a top 20 ranking in the NCAA East his senior year. 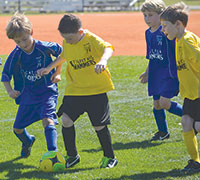 Registration is open now for the new season of the Optimist Club youth soccer. SUBMITTED PHOTO

several years in various capacities,” Meghan says. She also notes that these men have coached a wide spectrum of age and skill levels, “giving them the appreciation for identifying both recreational and competitive skills of soccer players” and providing “a well-rounded experience for those kids that who want to play soccer and have fun as well as the individuals who are eager and ready to progress to a more advanced level of soccer.”

To that end, Lyndsi and Meghan are hoping to have full rosters this season with a goal of 300 participants. All head coaches will be asked to receive a FYSA certified coaching license. All referees will be trained and certified, and all parties involved will have a background check before entering the field.

For the first time, the Optimist Club will offer recreational and competitive travel programs for the soccer players who are interested in extending their development beyond the traditional season. A series of free skills clinics and a Future Stars program for the younger players also are on the docket. The clinics will be led by Optimist coaches with the help of local and regional soccer organizations, and will be followed by an organized 10-12 week recreational league that will include many community-based events.

A free referee course will be offered to all Optimist members on Sept. 27-28. A coaching certificate course also will be available as well as coaching modules for all volunteers who are interested in coaching. The first course will be held in October.

Registration begins now for the upcoming season, which runs Nov. 1 through February. The free clinics will begin on Saturdays starting in early September and run through October. The clinics will feature special guests and will focus on foot work, skill training, agility training, endurance building and having a lot of fun. There will also be open kick arounds for boys and girls during the week at Mackle park. Tuesdays 6-8 PM are for players U10-U14, and Thursdays 6-8PM for U6-U9.

Many in the community already have stepped up to show their support for the Optimist Club’s new vision for Marco Island youth soccer. Among them are the owners of DaVinci’’s and Coldstone Creamery among others.

Their goal: To bridge the gap between Marco Island’s divided youth soccer environment, which they believe has been a disadvantage to the kids who just want to play the game, by delivering a technical and comprehensive youth soccer program.

Meghan sums it up by saying, “We are committed to providing a well-communicated and organized schedule of games and practices, unity amongst coaches to deliver the best possible development, and a fun and exciting atmosphere for the youth to increase their love for the game of soccer.”

For more information about the Optimist Club’s new youth soccer program, to register a child, to volunteer, to sponsor a team or to donate, visit www.optimistsoccer.com.