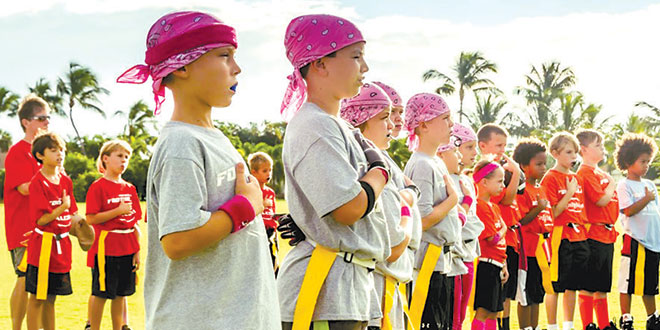 When you think of Fall, you see kids and backpacks, preparations for Halloween and footballs being tossed, soccer balls kicked and kids playing sports.

The Optimist Club of Marco Island sports programs are in full swing again this year. As the Island’s only youth sports organization, the Optimist Club of Marco Island (OCMI) plays a vital role in sports development and helping to shape young kids through sports. With over 300 participants across many sports, the organization has become an integral part of the community for families who live here seasonally or year round.

“As you look around Marco Island, you begin to notice the increasing number of children that live here. It’s a misnomer that this is just a retirement community. We have so many kids who want and need a recreational outlet, its wonderful to see such great participation in everything we offer,” commented Patrick Baldwin, recreational travel and soccer league coach, as well as Marco Island Charter Middle School (MICMS) girls soccer head coach.

OCMI currently offers flag football, basketball and a recreational soccer program. The programs run from September to May, and include special events throughout each season offering hands-on developmental instruction and great experiences for the kids. For example, the basketball program was very fortunate to have former professional NBA player and current WNBA coach Bill Laimbeer come to talk to the kids about his experience playing and coaching. He then hosted a mini-clinic for all of the participants in the basketball program.

“We have been trying to bring a greater emphasis to the instructional side of our programs. Our sports programs are the feeder programs for the middle school and high school sports teams. Aside from the obvious benefits of participating to stay active and have fun, we want to try to help these kids learn the game early on whether it’s basketball, soccer or even the fundamentals of football through our flag program,” elaborated Jennifer Reeves, recreational soccer coach and program sponsor through Sunset Grille, as well as

serving on the Optimist Club board.

Continuing the success of its Flag Football program, OCMI is in its second season with over 60 boys and girls from 7 to 11 years old. Most Saturday mornings, the OCMI Flag Football League has four games being played at Mackle Park. The mornings are filled with long passes, many smiles and a lot of touchdowns.

Over the month of October you will see a “Pink Out” across the fields, following the NFL’s efforts to bring attention to Breast Cancer Awareness Month.

“Flag football has been one of the fastest growing programs for the Optimist. We have almost doubled the number of kids playing in just one year. I’m sure it has something to do with tackle football safety issues and concerns over concussions, but I think, more importantly, the community we’ve developed around the sport with amazing coaches and supportive parents who really want the kids to have fun playing flag football, is the driver,” stated Bob Bruni, director of flag football.

The OCMI Soccer program was revamped last season to focus on offering a higher quality program with more instruction and fun, with less of an emphasis on being competitive. The program received Marco Island’s only Florida Youth Soccer affiliation, affording OCMI the ability to participate in coaching education opportunities, assistance with background checks and concussion education, and participation in FYSA-sanctioned leagues in Southwest Florida. OCMI runs a league on the Island for the children who want to learn the game of soccer, play with their friends, and stay active throughout the year. The league is a ten-week season with many fun events including a League Kick-Off event, as well as a season-ending Jamboree, where all of the business sponsors who support the program are recognized.

The Island league is the hallmark of the organization. There is a great draw of players and support, that Saturdays during December and January have become fun weekend gatherings for the community. “I get excited on a Saturday morning knowing I am 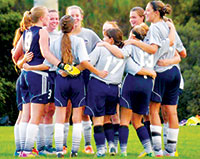 spending the morning at Winterberry, coaching and watching all of the kids play soccer. It’s nice to see the kids progressing and playing each week, while having some good times with their friends and teammates,“ added JW Drott, recreational travel and league soccer coach and program sponsor, through JWD Trees.

For those kids who are more passionate for soccer, the Optimist Club has built upon the OCMI league to give the kids more playing experiences. Through its recreational travel soccer program, the organization has expanded to roster five teams from just one last year. Lyndsi Koszo, soccer director elaborated, “We knew there was a strong desire to offer additional soccer opportunities in the Fall and Spring for those interested in playing ‘year-round’ soccer. Because of the limitations on fields here on the Island in the Fall, we had to find alternatives to help the kids continue to play. This is a program that anyone can participate in, if they’re interested. We are very proud of all of the kids who have come together this Fall, and the families who have committed to traveling to getting their kids out there to play.”

In early 2016, OCMI will start its Recreational Basketball League for ages 5 through 14. With over 120 kids participating, the program hopes to deliver another successful season focusing on development and helping to increase a love for the game of basketball. Bob Bruni, who also helps to spearhead the basketball program, commented, “Having Bill Laimbeer visit with us last year was really an amazing experience. He is a legend. And he took the time to encourage and work with the kids here on the Island.” Registration for the basketball program will open in mid-December.

The Optimist Club is run by a group of parent volunteers who have a vested interested in seeing youth sports thrive for the children of Marco Island. “We have a fantastic group of families who all pitch in, whether its coaching, running the programs, ordering and making uniforms, 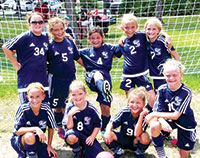 or working at our special events. Many forget that we all volunteer a large portion of our time, usually personal family time, to create a great experience for the kids. I can’t thank the people who are involved with OCMI enough. Most of us grew up playing community sports with some great coaches who helped to develop who we are today, and our passion for sports. We’d like to replicate our experiences and give back to the kids what we had,” elaborated Meghan Bonos, president of the Optimist Club.

On November 14th, OCMI is having a Mission Possible Tailgate Party sponsored by and held at Nacho Mama’s. All families who participate or have participated with the Optimist Club are encouraged to attend. The event will be held from 3-9 PM, and include an early evening buffet, a raffle with an exciting chance to win a one-week stay at a condominium on Marco Island, as well as other great games and prizes. All proceeds will benefit the Optimist Club of Marco Island. “We really wanted to have a fun event where the parents could get together and celebrate the successes of the kids in our programs. Too often, we all stand side-by-side at games and don’t get to know each other. We’re building these great programs together for all of the kids. We are extremely thankful that Nacho Mama’s has offered to host us and support our organization,” concluded Adam Campkin, recreational travel and league coach.

Itís not too late to register for OCMIís Recreational Soccer season. Visit www.marcooptimistclub.org to join the 2015-2016 season, which runs November-February. Participants will be placed on teams by age, and all children ages 3 to 14 are welcome. Practices will begin in mid-November, and games start Friday, November 20. New this year, the soccer program will feature an opening day Kick-Off Classic, OCMI Day at a Marco Island Charter Middle School soccer game and an end of the Jamboree. For more information, visit the OCMI web site or email soccer@marcooptimistclub.org.