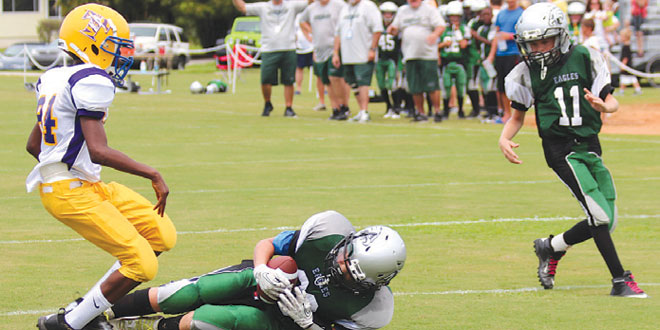 This week the Eagles played at the “Nest” again on the island.

The U-10 team played the Golden Gate Tigers for the 2nd of a best of three series for the season. The U-10 team took an early lead in the game but this week the Tigers were a bit more ready for what the Eagles offensive unit had planned. Every player from the U-10 Eagles team made a contribution to what would end up being a win. The end of the game resulted in the Tigers 6, Marco Island 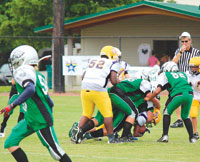 U-12 player Jackson O’Shea and Stuart Endres bring down the Tiger ball runner.

The U-12 Eagles also played the Tigers, and after a very hard week of practice correcting mistakes from the game last week the U-12 team was holding the Tigers scoreless for the first half of the game. As the second half of the game started the U-12 eagles noticed the plays they had seen the week before, and # 11 Cooper Nettles picked off a pass and was put the first points on the board for the game. 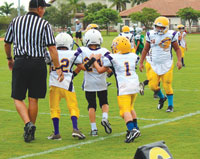 U-10 Tigers celebrate after a touchdown.

kick the extra point for two additional points and # 68 Jessica Pierce was called to the field. She put her foot to work giving the Eagles an eight point lead. The Tigers scored but the U-12 team stopped the extra point attempt. The Tigers did not stop and scored again closing the margin to just 2 points. With just about a minute left, the Tigers threw a pass that the Eagles could not stop and the touchdown turned the tide of the game. The final score was Golden Gate 19, Marco Island 14.