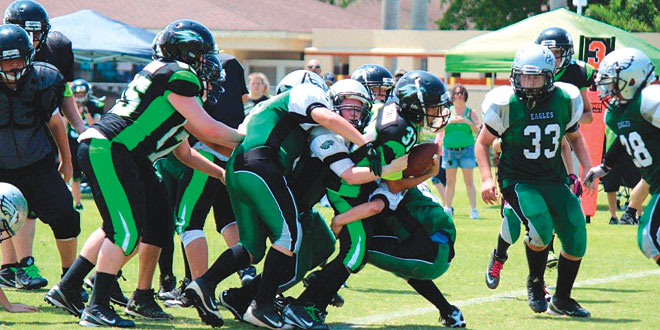 The U-12 Marco Island Optimist Eagles opened the short spring season against the Lee County Hawks at Fleishman Park in Naples. After joining the newly formed “South West Florida Youth Football League” the Eagles were looking forward to the first game. What could only be described as a “David vs. Goliath” when it came to the size of the teams, the football game was about as even a match as could have been hoped for. The Marco Eagles team of only 13 players went against the Hawks who fielded a team of over 40 young players. The Marco team played with the hearts of giants and it showed with all the players having to play iron man football with little rest during the game. This spring team includes: Richard Reisinger, Jimmy Gates, Cody Webb, Jordan Love, Jackson O’Shea, Charles Hamilton, Ryan Wallace, Jay Cartwright, Zachary Hurdis, Jacob Warren, Cooper Nettles, Justin Webb, Stuart 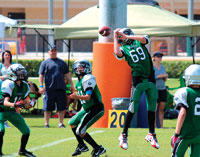 While only a few practices were held before the first game it was clear the team was working well together with QB Reisinger completing a short pass to Cooper Nettles for a long run of 64 yards for the first score of the game. As the Eagles team continued to battle the Hawks team it was clear the game was going to be a battle to the end, after the Hawks team scored again, QB Reisinger found Zach Hurdis open for a pass that allowed Zach to score his first of what would be two touchdowns for the day. The extra point attempt was made by Cody Webb and the Eagles were tied with the Lee County team. The defense held the Hawks and soon learned that the outside was a favorite spot to try to run to and 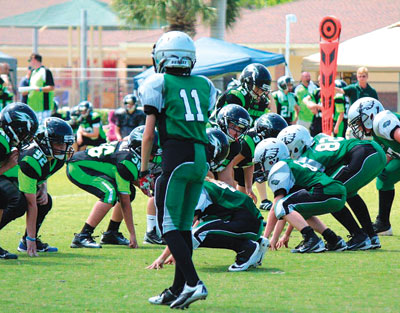 the team was able to contain almost all but a few big runs. The Hawks passing game caught the Eagles off guard only a few times today and the run up the middle was stopped several times by Jake Warren, Stuart Endres, Jay Cartwright, Jordan Love, Jimmy Gates and Justin Bethra.

As the fourth quarter started the Eagles team was tired but the big hearts they played with all day won out, as the final buzzer sounded “David” was able to compete, if may be not beat, “Goliath” with the final score being Lee County Hawks 20 – Marco Island Eagles 20.

The Eagles will look to field a U-6, U-8, U-10 and U-12 team in fall and if enough players sign up a U-15 team to play against the other teams in the new league. Players and parents interested in learning more about the new league can visit the www.swflyouthfootball.com web site for more information.

Sign up now for the remainder of the spring season to get ready for fall! Fall football will also have cheerleading based on football age groups U-6, U-8, U-10 and U-12. Sign up will start on June 1st with season starting in July.

Registration is now open for the new Optimist Club Lacrosse league until June 1st with practices starting around June 15th. Boys and girls ages 7-14 are welcome. Lely High School coach Lynn Gordon will be heading the league. The Optimist Club is pleased to add this to their line-up of sports opportunities for area youth.