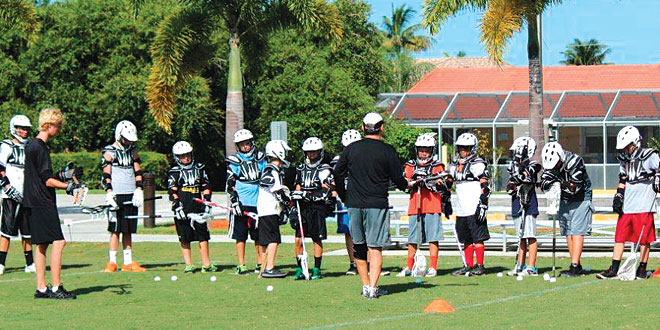 The Optimist Club of Marco Island has started a new Lacrosse program with the help of Marco Island Parks and Recreation Depart and it is being coached by Lely High School Varsity players Cody McCauley, Cotton Hail and Drew Fordon and the head boys Lacrosse coach Gary Chernow from Lely High School. The sport while new to Marco is not new in the United States with a very large following and even a Major League Lacrosse League for the players who reach the highest level of the sport. The 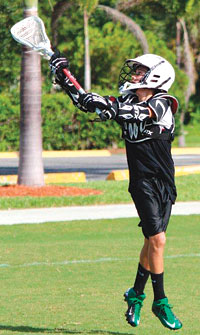 Optimist Club saw a need to try to provide the sport that is being directed by Mr. Lynn Gordon to be a feeder system to our local high schools that offer Lacrosse. Nationwide Lacrosse has 125,000 players in the youth and high school level. Lacrosse is one of the fastest-growing sports at the high school level and is now sanctioned as a championship sport in 21 states with many college scholarships given each year to some of the nation’s biggest universities. 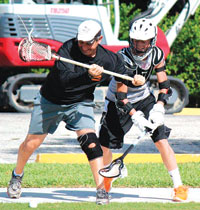 [/caption] width=”200″ height=”210″ />Marco is a great place to start a new Lacrosse program with our kids being a feeder system to Lely High School as well as a chance to provide the kids with a new opportunity to try a sport that they may not see until they get older and then be behind the power curve when they start playing. Players ages 10-14 not in high school are still being accepted for the Lacrosse program which runs into early August. The Optimist Club will field 2 teams of

9 each this summer with a Green Eagles team and a Gold Eagles team and hope to play the Naples Lacrosse League in a match toward the end of the season. The registration fee is $200 for Lacrosse due to the cost of the gear and financial aid is available.

Come out and support this new sport and see what your Eagles Lacrosse program looks like at practice. Practice is Tuesday night from 6-8 PM and Saturday from 9-11 AM at Mackle Park.