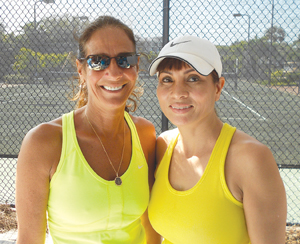 The 3rd Annual Hideaway Beach Open will be played March 2nd and 3rd at the Hideaway Beach Club on Marco Island. There are divisions for men’s and women’s 3.0, 3.5 and 4.0 doubles. There is a limit of 16 teams in each division. Players must play at their USTA level or higher. Register early!

Registration deadline is Tuesday, February 26th at noon. The entry fee is $33 per person which includes lunch on Saturday, a t-shirt, a two-match minimum, tennis balls and prizes for winners and finalists. Players can make their checks out to Hideaway Beach Association and mail them to Hideaway Beach Club, 250 South Beach Drive Marco Island FL 34146, or register by phone at 239-642-6300 with credit card.

When registering, please provide your email address. We will email your starting time to you after 6 PM on Thursday, February 28th. For additional information, please contact Doug Browne, Dbrowne912@aol.com or 239-642-2845. Please fax your entry to 239-642-4728 and please mail your check by February 20th at noon.

Now that we are in our third year, we have a fabulous slate of activities for each entrant. We have a lot of ‘bang for your buck’ as each participant will go home with a nice 2013 t-shirt, enjoy a super lunch courtside and play two matches minimum. Yes, if you lose your first 2 out of 3 set match, each team moves into a new ‘back draw.’ Finally, the biggest change is our 3rd annual tournament is just a two-day commitment of time, weather permitting. The biggest draws will begin Saturday morning; if we followed last year’s results, the 3.0 or 3.5 divisions will begin play at 9 AM. Our beautiful club features nine hydro-grid ‘clay courts’ and will allow us to run a minimum of eight matches per 95-minute cycle. 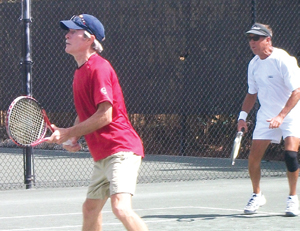 YMCA, Marco Island Racquet Center, Cape Marco, the Marriott, Hammock Bay, Fiddler’s Creek, Eagle Creek, Player’s Club, Cambier Park and Pelican Bay. The Hideaway Beach tennis committee is geared up and ready to make this an enjoyable experience for our members and our fine guests. See you on the courts.

Did you see who won the Australian Open singles titles? My predictions were Novak Djokovic and Serena Williams. Had Williams stayed healthy, it would be interesting to see if she would have captured another Grand Slam title. But, give credit to rising American Star Sloane Stephens (whose late father played for the New England Patriots) who is clearly on path to do great things in the future.

The American women are surging, as many tennis experts believe that Madison Keys just might be the best talent in the bunch. What truly fascinates me is that Keys is from Rock Island, Illinois or part of the Quad Cities. I played college tennis in the Big Ten at the University of Iowa in Iowa City and it is only 60 minutes to reach Davenport, Moline, Bettendorf or Rock Island. It stuns me that such an amazing talent can come from ‘cold’ country.

We are optimistic about the American women and their rise to stardom but what about the American men Personally, I’m nervous about Ryan Harrison and his future on the ATP Tour. Just two years ago, it appeared that he could break into the top 20 but now it is not certain. Recently, I commented about Nebraskan Jack Sock who had won the US Open Mixed Doubles title with Georgia born Melanie Oudin but now I’m perplexed about his progress. Tennis is a tough business. Just look at old American Phenom Donald Young. Not long ago, Kalamazoo champ Young was the talk of the tennis world. Just two years ago, he blitzed Andy Murray at Indian Wells, but has not been able to sustain this high level.

Please email me your list of potential American men who may win a big tournament in the near future. I welcome your input.