One Year for Squadron’s Tuskegee Painting 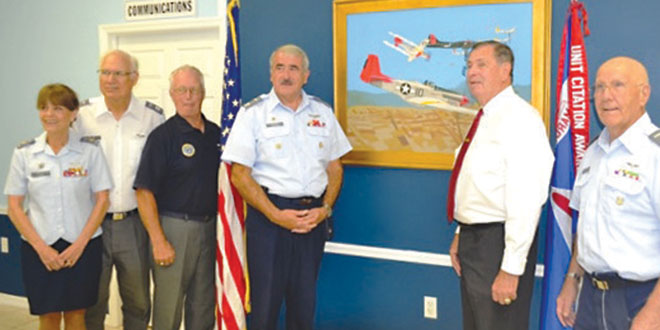 This Veterans Day will mark the one-year anniversary for the Marco Island Senior Squadron’s receipt of custody for the last Tuskegee Airmen painting.

The Tuskegee Airmen painting “The Longest Mission” was presented to the Squadron on permanent loan from the Marco Island Center for the Arts. The painting was donated to the Center for the Arts in 2011 by artist and Tuskegee historian Clinard “Clint” Martin. However, since the Center is a gallery for exhibiting artwork on a temporary basis, there existed no permanent display for the painting. Project director Dave Rice came up with the idea to approach the Squadron as a possible suitable and appropriate location for displaying the painting.

the beginning of every meeting when the Pledge of Allegiance is recited and the participants face the flag, they are also facing the painting, which serves as a reminder of the valor and bravery of these Airmen.

The Tuskegee Airmen is the popular name for a group of African-American military pilots who fought in WWII. They were also known as the “Red-Tail Angels” because of the red color of the aircraft tail and rudder, and because of their unsurpassed record of protecting their charges from enemy fighters. During the war they formed the 332nd Fighter Group and the 477th Bombardment Group of the United States Army Air Corp.

The Tuskegee Airmen were the first all African-American flying group to see combat during WWII, in North Africa, Sicily and Italy. Their aircraft varied, from the Curtis P-40 Warhawk, the Bell P-39 Aeracobra, the Republic P-47 Thunderbolt to the North American P-51 Mustang, the plane with which they were most commonly associated. By the end of the war, they had one of the best combat records and were the genesis for desegregation of the U.S. military.

The Marco Island Senior Squadron is very honored to be among the impressive locations where other Tuskegee paintings are displayed, such as the Pentagon in Washington, D.C., the D-Day Museum in New Orleans, La., the U.S. Air Force Museum in Dayton, Ohio, the U.S. Army Museum at Camp Shelby, Hattiesburg, Miss. and the Mississippi Museum of Art in Jackson, Miss.