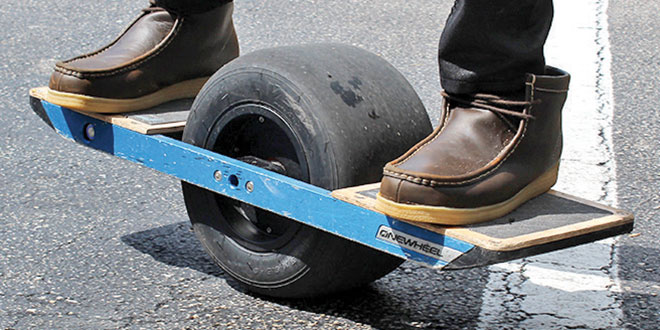 Not often someone is driving and hears, “What’s THAT?!??”  To the young man riding around on a one-wheeled board, it must have been a little disconcerting to have a car start following close behind, but that is just what this writer did.

We met a young man, originally from Jamaica, riding the board. His name is Lance Hart. The board he was riding is what is called a One Wheel. That is correct, it is different from a hover board as it only has one large wheel in the center. Lance says because of the design it is very easy to learn to operate. “It will go through dirt, grass, gravel, mulch, water and sand. I’ve ridden it on the beach a couple of times. It is virtually indestructible! It is water resistant and comes with a plastic guard to prevent spray back to the rider. It is great at night because it has white lights in the front and yellow lights in the back.” Not only can Lance see what is in front of him, people behind him can see him as well.

According to Lance, the board will get to speeds up to 15 mph and it will travel up to eight miles on a single charge. “To fully charge the unit is only 20 minutes. The

board serves as Lance’s daily transportation while he is staying with a friend from Orlando. Lance did say a dog chased him once, but he just kept right on going. “The tire, motor and engine are all inside the rim of the wheel. I bought the One Wheel off of the internet, and haven’t experienced any problems with it. It is so easy to learn.” It costs a bit more than a hover board with a total about $1,600, to which Lance pays $105 per month.

Besides boarding, Lance loves to cook. He cooks Jamaican specialties like curry goat, rice and peas, jerk chicken, oxtail, beef patties, and more. If you’ve spent time in the Caribbean, your mouth is watering right now! He spent a lot of time with an elderly cousin who taught him to cook. He’d love the opportunity to expand those skills.

Coastal Breeze News wishes Lance the best of luck in his goal of finding a local establishment to further his skills as a chef. As we were ending our discussion on the One Wheel in the parking lot of a grocery store a lady stopped and asked Lance how much he paid per month for the board. He told her and she replied, “You could get a KIA for that amount!” True, but it would take many more years to pay!