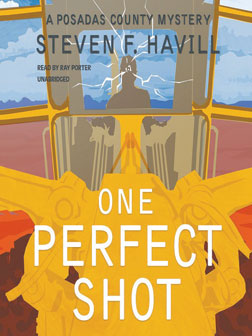 I am preparing myself mentally to start reading Ken Follett’s Fall of the Giants which is a whopping 1,000 pages long. I am sure I will enjoy it as I have many others written by Mr. Follett, but, in the meantime, I need to read something reasonably short that doesn’t require a lot of thinking or sorting of dozens of characters and One Perfect Shot fills the bill perfectly. It has likable characters, which is always a plus, the main two being Undersheriff Bill Gastner and a new deputy, the department’s first female hire, Estelle Reyes. Set in Posadas County, New Mexico, near the Mexican border, it begins with the death of Larry Zipoli, a rotund county employee, who has died instantly after being shot once, right over the eye, through the windshield of the road grader he was driving. Nobody seemed to have noticed the death of the grader operator. It is suggested that anyone seeing him sitting there might have assumed he was doing what they have often seen well fed road workers do in the afternoon, taking a nap.

All in all, not too unusual for the beginning of a mystery except that the bullet shows no sign of any rifling which would normally be expected. And the bullet is recovered embedded in the skull of Mr. Zipoli, when any well trained investigator would expect it to not only have gone straight through the skull, but probably out the back of the grader, as well. Once more the victim seems to have been totally unaware that anyone was about to shoot him. The grader is still in idle when he is found so it would appear that he had not been talking to anybody just before he was killed or he would surely have turned it off so that he could hear what was being said.

As the initial investigation begins, there doesn’t seem to be anyone with a grudge against Zipoli. The shot was too exact to be an accident caused by someone just out taking target practice nearby and Zipoli was working far from any buildings.

Bill Gastner is, at first, not too thrilled to be joined by his new female partner who has not even been officially hired by the department. She has no uniform, no weapon, no experience, and no Kevlar 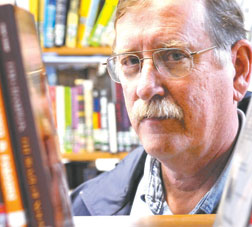 vest and has been assigned to him on the strength of one interview and the fact that she is the grandniece of an old, somewhat derelict friend of the Sheriff’s, known for having a “wonderfully casual relationship with the law”. However, he is soon won over by the fact that she does not talk much, stays out of the way, is very observant, is willing to do whatever she needs to do and, as a bonus, is rather attractive.

The first order of the day, since there is no obvious shooter, is to find out why the bullet did not do more damage than it did and why it doesn’t have the expected rifling. The man to whom he assigns this task fairly quickly comes up with a possible, but puzzling, theory. It would appear that if a smaller caliber bullet is used in a larger rifle it would leave no rifling marks. However, one very large potential problem is that it will also be terribly inaccurate, so it is not something an experienced person would normally do. If the shooter were to shoot six times, he would be lucky if even one bullet hit the target he was aiming for. The fact that the murderer appeared to have been standing some distance from the target and that the bullet would have been deflected by the windshield’s glass, makes it even more improbable that the bullet would accurately reach its intended goal.

Mr. Zipoli often took young men in the neighborhood out with him to go fishing or to water ski behind his boat. Could one of them have had a grudge against him? How about one of the men he worked with? Or his wife, or the neighbor whom his wife tells the police has been a real annoyance to her and her husband, and, it has been suggested, appears to be growing pot in his backyard?

This book was just what I was looking for before tackling one I knew would take a lot of time and concentration to read. It had enough in it to keep me entertained but not so much as to tax my brain. Perfect!