One Million Gallons in a Month? Marco man faced with $10,700 water bill. 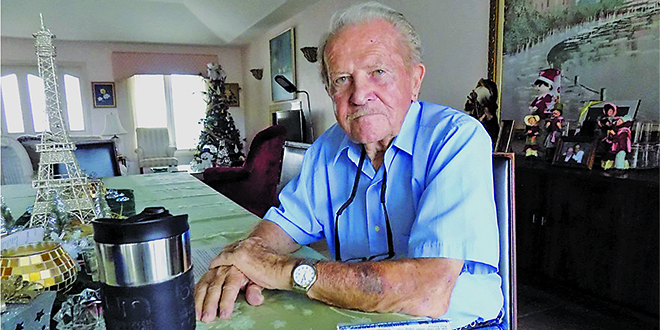 Photo by Barry Gwinn:Don Mills explains the circumstances of a $10,700 water bill for his home in November. “This could happen to anyone,” he said.

Don Mills fought the Japanese in the Pacific during World War II. As a high school principal, he presided over a Long Island high school riven by racial animosity, at one point, facing down a group of students who were attempting to burn down the school. Retiring in 1980, Mills and his wife, Genevieve, moved to Marco Island, thinking that he would leave all that behind and find peace and tranquility in paradise. Aside from his wife’s recent untimely death (They were married 61 years), he found what he was looking for here. That is until high noon on December 12, when he pulled into his driveway and noticed a stranger talking to a friend. The stranger, a meter reader for the Marco Island Water Department was visibly agitated. He blurted that Mills had just consumed over one million gallons of water. Then things moved fast. At 92, Mills still has a keen mind and is by nature a man of action. No sooner had the meter man left than a man from Thompson Irrigation came over. “He turned off the house and irrigation mains, but noticed that the meter was still spinning.” Mills said, “Checking the water line route to the fishing table, he heard a faint sound of running water and concluded that the PVC pipe leading to the fish table had broken.”

Mills had the pipe capped and a shut off valve installed. The next day, he went in to see the folks at city hall. “They all seemed to know all about me and my situation,” Mills said, “Several of the secretaries commented that I must be the fellow who used a million gallons of water.” Later the nickname “Million Gallon Don” caught on. Mills got right in to see Michon Jackson, the Utility Customer Service Manager. “She told me that my November water usage was the largest ever recorded by the water department, and that my bill would be close to $11,000,” Mills said. Before recovering from that shock, another came hard on its heels. “I was told that the city could not give me any relief on this bill,” Mills said, “They are authorized to afford relief only once and I had already received relief on a prior bill. (He has no recollection of this prior relief but has no reason to doubt it) They weren’t able to help me on this one. I was no longer eligible.” Jackson recommended that Mills come in to see the City Manager. Mills set up an appointment for January 4th.

In the meantime, conferring with others and doing some calculations of his own, Mills tried to figure out how this could have happened. “I had no inkling that this was going on,” he said, “It was totally invisible to me, because the leak was under the French drain [along the seawall] and was leaching down into the canal.” Mills figured that a ¾-inch PVC pipe, with the inside diameter of a nickel, was the cause of all his problems. With the increased water pressure during tourist season, he figured the pipe was spewing out water at the rate of 23 gallons a minute for over 30 days. “If this leak had been under my house, it would have 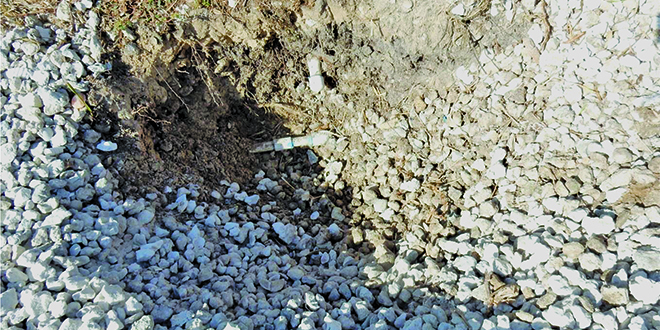 Photo by Doreen HertelMills had to dig below the white stones of his French drain to fix the broken ¾ inch PVC near his seawall, which unbeknownst to Mills, had leaked a million gallons of water in November 2016.

filled it up from floor to ceiling – eight times,” Mills figured, “Had the leak occurred in my garden, I would have had enough for three swimming pools.” At 8.34 pounds per gallon, Mills estimates that at least 417 tons of water leaked into the canal after passing through his water meter. Mills built his house in 1976. Since that time he has had to periodically replenish the pebbles in his French drain along the sea wall. He posits that it might have been the weight of all those pebbles which broke the pipe. Now he felt he had a handle on this and was ready to meet with City Manager Roger Hernstadt. It turned out that Hernstadt required no explanation.

On January 4th, Mills kept his appointment with Hernstadt and recalls a very satisfactory meeting with him. “Hernstadt told me that my bill was $10,726 and said that the problem might be resolved by doing something unprecedented,” Mills said, “He said that they had had a situation like this with me before, and that they had given me prior relief. (It was apparently on a much lesser bill.) He explained that each customer is entitled to relief only once and if I were to pay back the amount of relief they gave me the first time, they could proceed as if it had never happened. He said that there was a special formula to work out the amount of relief, Michon Jackson was working on as we spoke.” A few hours later, Jackson called back with some good news and some bad news. The good news was that Mills was indeed getting some relief. The bad news was that he would be getting only $4,435 in relief. He would still owe $6,265. Jackson told Mills that others had had similar problems, but that Mills’ water bill had indeed set an all-time record. She said they would be offering a payment plan in which Mills could avoid a 5% late fee and the filing of a lien on his home. She called back an hour and half later and gave him the details. The plan calls for 12 equal installments of $522 per month, which along with his regular water bill payments, will have him current by this time next year. After mulling it over, Mills signed the agreement.

“I was going to fight this,” said Mills, “But after seeing how hard the city was working with me and explaining their position, I felt that they had honestly gone the extra mile for me. They were courteous, respectful and very much aware of the stress this was causing in my life.” It would appear that water meters are still read in the same manner they were 100 years ago – one at a time. There is no centralized system which sets off alarms. Because his bank makes automatic payments, Mills did not notice a stretch of inflated bills last year, one for $1,005 and another for $615. If he had, he almost certainly would have discovered the leak in time. “I am looking for a way to centralize and modernize the water metering [leak detection] system,” he says, “There are a lot of homes in Marco Island which may also be sitting on ticking time bombs.”