One Million Acts of Kindness 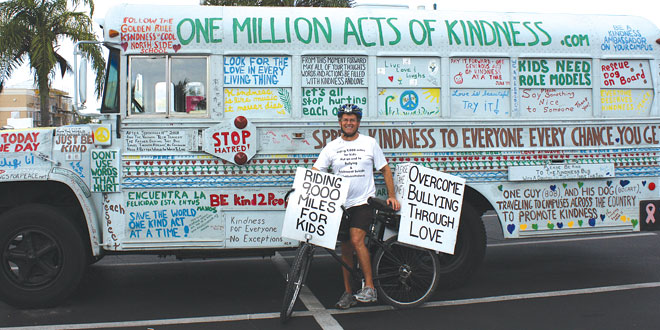 In the wake of the Sandy Hook Elementary School tragedy where six school teachers and administrators and 20 young students lost their lives, Ann Curry of NBC News came up with the concept #26Acts of Kindness. Encouraging people through her Twitter account to commit one act for each of the 26 lives lost, she wrote on her December 18 blog, “I know the truth: if you do good, you feel good. It’s the most selfish thing you can do. Right now, this country wants to heal. I think the only thing comforting in the face of a tragedy like this is to do something good with it if you can. Be a part of that wave.”

Bob Vortuba has literally been riding that wave since the mass shooting at Virginia Tech in April of 2007 where 32 people were killed and 17 injured. “Three days after the shooting I drove from Cleveland to Blacksburg. I mean, how do you wrap your head around something like that? I was there for four days and I watched tens of thousands of people go through that memorial and I thought, something is wrong here and it needs to change. But what can I do as an individual? And I came up with a goal of kindness. That’s what One Million Acts of Kindness is.”

A builder from Cleveland, Ohio, Bob traded in his entire lifestyle, selling his house and his car to live in a 1990 school bus he has dubbed, “The Kindness Bus.” He began traveling around the country to spread his message of One

Riding his bike through Marco’s streets, Bob hopes to send a message of love. PHOTOS BY NATALIE STROM

Million Acts of Kindness. “I drive the bus to a town and then ride my bike (‘The Kindness Bicycle’) around the town,” Bob explains. He stops at schools, churches, community centers, city halls and newspaper offices and shares his story. He lines up speaking engagements where he can and talks with as many individuals on the street that will listen.

In the past six years, he has traveled the country spreading his message of kindness in the name of those who lost their lives at Virginia Tech as well as for the Wounded Warrior soldiers and fallen firemen and police officers. His latest ride, called R.O.C.K., stands for Ring Our Country with Kindness. Beginning in New York in mid-October 2012, Bob is currently in the midst of riding around the perimeter of the United States – a 9,000 mile journey. This specific ride has but one mission: To save kids lives.

Bob rides to honor three students killed at Chardon High School in February of 2012, a school only ten miles from his home as well as for three young adults from his hometown who committed suicide. Everywhere he stops he spreads the message of anti-bullying and youth suicide prevention. “It’s an epidemic,” Bob states of youth suicide which claims the lives of on average 4,200 young adults between the ages of 14 and 25.

Bob believes that kindness is the answer. He hopes to change the world because, as he says on his website, “I love you guys too much to sit back and not do anything about this.” By “you guys,” Bob isn’t just talking to his three 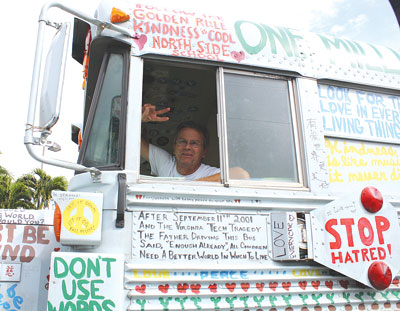 children in their 20’s that he names as his true reason for his mission. He’s talking to everyone.

That means us here in Southwest Florida. “Naples has been unbelievable. The support has been fantastic. I came down to Marco for the day and I’ve already been invited back to talk at the Elementary School.”

His focus when speaking to kids is the issue of bullying, but he know he needs to talk about much larger issues with them too. For this, Bob enlists the help of his dog and trusty companion. A Boston Terrier, “Bogart is five years old, but I got him when he was a year and a half and he had already had three different owners. He was bounced around a lot and probably didn’t feel loved, but he held on and he knew with each home that it had to get better. Then he met me and he is having such a great life.” This is Bob’s way of teaching kids to hang on to life even in the toughest of situations and know it’s going to get better.

Bob asks those who are willing to commit to end bullying and youth suicide to take his pledge of One Million Acts of Kindness. By doing so, he asks that people make a commitment by honor these four simple statements: I will comfort those hurting; I will help those being hurt; I will help you realize your importance in the world, and; You are needed and you are loved!!

To learn more about Bob’s mission, visit www.OneMillionActsOfKindness.org, Follow him on Twitter at @KindnessRocks or send him an email at thekindnessbustour@gmail.com.