One man’s unnatural fear of bunnies and Elizabeth Vargas 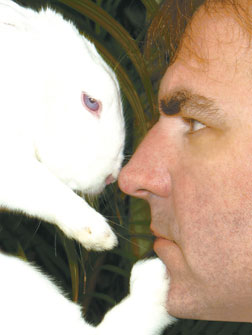 The Marco Player’s Theater is letting Randall Kenneth Jones’ mind run wild in their next Lunch Box Series. “Attack Bunnies Live,” which will run only once, at noon on March 10th, will be an experiment in theater, to say the least.

The Lunch Box Series at The Marco Players Theater began four years ago and has been a tremendous success. Featuring a performer or small performance group, the entertainment lasts about 45 minutes. Following the performance, guests are provided with a box lunch, courtesy of Mango’s Dockside Bistro, in the theater which accompanies a Question and Answer session with the performer(s).

“Attack Bunnies Live” is the fourth Lunch Box Series of the season and will certainly provide for a most entertaining performance. The Q&A section at the end may very well be just as amusing.

As Randall Kenneth Jones explains, “I always thought I wanted to steal David Sedaris’s life but then I realized I had one of my own.” He began to write about it and even came up with a book all about the strange events of his life. Example: his grandmother feeding him his pet chicken as a child. However, as he brought his book to publishers, they flat out told him, “the book is good, but you’re a nobody. Better luck next time.”

So he turned it into a blog. Attackbunnies.com features true accounts of Randall’s almost ridiculous life. Read “Attack 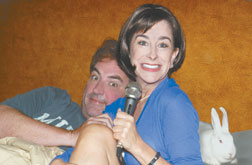 Randall Kenneth Jones, as himself and Kathleen Gravatt as Elizabeth Vargas.

of the Lepus” and you will understand.

Or… go see him perform at The Marco Players Theater and have him tell you about it himself. The show will be a combination of reading, theater, improvisation and audience participation. Randall will be reading excerpts from his blog as fellow thespian and Marco Players regular, Kathleen Gravatt, joins him onstage. Kathleen will be acting out different parts of Randall’s oral account of his life. She will play his mother, his boss, a young Jodie Foster and even Elizabeth Vargas. Best known as co-anchor on ABC’s 20/20, Randall has an unnatural fear that Vargas is out to get him. See the show for further explanation.

He also has an unnatural fear of bunnies. Although, after hearing about his many different horrific encounters with these creatures, it doesn’t seem so unnatural. When, as a young child, the Easter Bunny stares at you outside of your bedroom window for what seems like hours, it seems that a natural fear would develop. But this is only the beginning of Randall’s encounter with the frightening beast that is the bunny. Randall has a permanent scar from a rabbit. As he describes the incident, “I was at work. I was naked. And I was attacked.”

Learn more about Randall’s numerous neuroses at what should surely be an outrageous and entertaining afternoon at The Marco Players Theater on March 10th. The tickets are $25 per 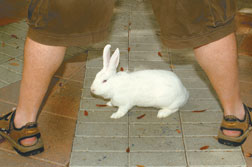 person, which includes the performance, box lunch and Q&A section.

The Marco Players are also currently featuring the production, “Visiting Mr. Green,” which runs from February 15th through March 4th. According to the Marco Players, “this comedy-melodrama is about family, friendship, open-mindedness and forgiveness. It begins as a comedy about two men who do not want to be in the same room together, and becomes a gripping and moving story of getting to know each other, coming to care about each other, and exposing old wounds they have been hiding and nursing for years.”

The final show of the season will be “Last of the Red Hot Lovers.” As Marco Players describes, “this Neil Simon comedy, winner of the Writers Guild of America Award in 1970, is about Barney Cashman a gentle, middle-aged, married man who is in hot pursuit of the 60’s sexual revolution before it passes him by.” This Broadway hit won four Tony awards and will run at The Marco Players Theater from March 28th through April 15th.

There will also be one more Lunch Box Series performance, entitled “MacBeth, A Love Story.” Presented by the group Shakespeare in Paradise, the show will be at noon on April 15th, featuring Kathleen Gravatt.

All Marco Players performances are held at The Marco Players Theater at 1055 North Collier Boulevard in the Marco Island Town Center Mall. Tickets may be purchased at themarcoplayers.com or by phone at (239) 642-7270.