One HUUUGE Experience: Part One

We got the shopping spree, we got the cruise, we got a strawberry pie, and we gota photo with Billy.

Love him or hate him, you have to admit, his success in Cape Coral has been “HUUUUGE, Florida, HUUUUGE!” You know the man: Billy Fucillo of the Cape Coral Kia dealership. With his trusty sidekick, Caroline, Billy has turned his low-budget television and radio ads into a sensation in Southwest Florida. His dealership, boasting three lots of new and used cars is as HUUUUGE as he says it is. And so are the car deals and prizes to be had if such car is purchased.

My friend Duffy needed a car, and I’m pretty savvy at haggling with the dreaded car salesmen (life-lesson I picked up from my dad), so Duffy asked me to come along. She wanted a four-door; something new and with a lot of trunk space. She and I are no millionaires that’s for sure, so I suggested we go see the spectacle that is Fucillo Kia because the cars are modestly priced and had good reviews.

We pulled up to quite the sight: huuuuge balloons everywhere, hot dogs, chips and soda for anyone and incredibly loud and obnoxious rap music. Jerry Lopez came right up to us as we pulled in and guided us to a parking space. He was to be our dreaded car salesman. I wasn’t worried; I could tell right off the bat that he was a nice person. So that was refreshing. 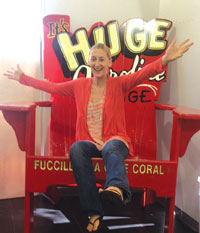 we responded. Well, he had never heard of it, nor had anyone else we dealt with. They were quite intrigued by our town and our behavior as the experience moved forward. Not to ruin the rest of the article, but we all had a great time and a lot of laughs.

Jerry brought out a Kia Soul with all the bells and whistles for Duffy to test drive. He informed us it was $20,000. I said, “well Duffy, there’s certainly wiggle room here since the MSRP is only $17,000, and most people paid less than that.” Jerry was silent. Then he said the $3,000 difference was due to the sunroof and rear backup camera.

Then I pulled out my secret weapon: “My dad (really step-dad) works for Jeep and we can go there and get a 10 percent discount on ANY car – new or used, Jeep brand or not.” That one threw our sweet Jerry for a loop.

In came John Reale, the Sales Manager. It so happens that he worked for Jeep for years and knew I was no liar. Needless to say, the base price we got for the vehicle was only $200 more than the factory price.

Then we saw Billy! He was huuuuge! Big, tall, loud

and incredibly friendly. I screamed, “Billy! Billy! I want to meet you!” He came right over and I made him take silly pictures with Duffy and me.

Then, he informed us that Duffy’s purchase gave her the $1,000 shopping spree in Miami that included a free night stay at the Hyatt Regency and dinner with him and Caroline.

“Congratulations!” they shouted and handed us a strawberry pie. “But that’s not all,” said Jerry. “A few months ago, we gave away tickets to a cruise for everyone who purchased a Kia. We filled the boat but there are 30 spots left. This morning, Billy said to give the 30 spots away to those we felt deserve it. Congratulations! You’re going on the cruise, too!”

As we left, I walked passed a clear office where Billy was sitting on the phone talking business. I waved. He pointed at me and gave me the thumbs up. He had to approve the cruise, and between Duffy’s charm and my own, Billy decided to bring us aboard the Royal Caribbean cruise. He’ll be there too, and I am going to find him an make him my new best friend.

Then we drove away in a brand new Kia Soul.

When you read this, Duffy and I will have just returned from our HUUUGE KIA CRUISE. Check out the next edition of Coastal Breeze to see if Billy and I are now best friends and to see if the deal was as HUUUUGE as he and Caroline always say.