One Father Leaves a Legacy 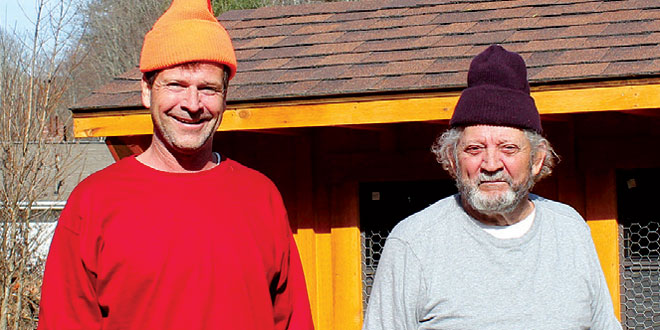 “At one time or another it seems that all hvac (heating, ventilation and air conditioning) men dream of working on the big equipment – going up on the top of multi-story buildings, working on cooling towers and seeing the expanse of the city below. Next, they get into the basement to work on the centrifugal compressors and steam boilers as big as school busses for hot water and heat or water pumps as big as dog houses to transport the chilled water to air handlers,” explains Ken Sampson. “My dad lived an hvac mechanic’s dream. He did it all.”

Known to many on the island as “Tex,” Carlton M. Sampson (C.M.), owner of Sampson Air Conditioning for over 25 years, passed away on October 12, 2012. “When Dad passed away, we tried to get the word out. Some people ended up finding out through second hand news or by accident. So many people sent cards, called or sent flowers. But how do you get the word out to such a diversified amount of people?”

Tex had lived in and traveled through practically every state within his lifetime, and informing all of his family and friends of his passing really wasn’t that easy.

The middle of three sons, Tex was raised 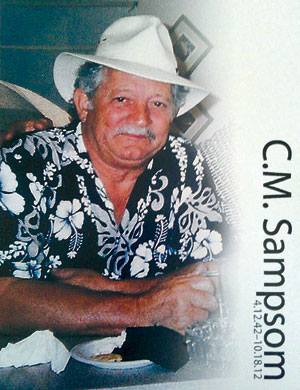 by his mother Roberta and father Carlton James Sampson (C.J.). C.J. worked the oil circuit, moving around to Texas, Colorado, Oklahoma, New Mexico, Wyoming and Kansas – to name a few. Tex didn’t always move with the family, but in 12 years he attended 13 different schools.

C.J. was a hard worker and he taught that to his son. “Dad came from good stock,” adds Ken. “I like to think that I do, too.”

In the early 1960’s, Tex went to Okmulgee Tech, in Okmulgee, Oklahoma, a trade school, where he learned the hvac trade. “I followed about 20 years later, in the early 1980’s, attending the same school but it had a new name,” states Ken. Then, It was called the OSU Technical Branch. Ken’s son and Tex’s grandson, Carlton Brian Sampson, also attended the same school, but chose computer science for his field. “Okmulgee, Oklahoma just can’t seem to get rid of the Sampsons,” adds Ken.

Tex’s hvac career began in Dallas where he “was well known and respected all around Dallas. He received the biggest bonuses several years in a row.”

Tex sure was something. One day, he brought the three boys to J.C. Penney to purchase some things for school. “Dad drove straight through the parking lot to the front of the store and parked the truck. My brother and 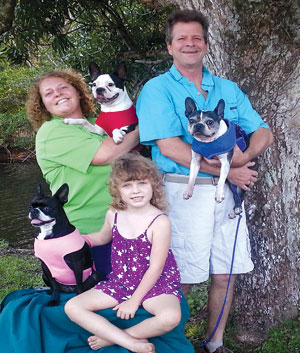 The family behind the man: Ken, his wife Eva, daughter Olivia and their three Boston Terriers, Bully, Racer and Lulu.

I just looked at each other, knowing he shouldn’t park there. Dad grabbed a little sign and put it on the dash as he said, ‘this is an emergency air-condition repair.’ We thought, ‘wow, our dad is so cool.’”

Cool being the appropriate word. After all, Tex moved to Marco Island in 1983, and kept many of its residents nice and cool – especially during those brutal summer months – for years to come. “He bought a yellow pages ad about one inch tall in 1984, I think,” Ken recalls. “From that point on, it was word of mouth for over 25 years; one phone call at a time.”

Throughout those years, Tex and his wife Dee have had the opportunity to travel all over the world, including Europe, Egypt, Canada, Alaska and more. “I am just glad for my mom and dad; for just being such simple people, yet getting to do so much. Dad never made it to millionaire status or was a CEO, but he did get more out of life than what most people will even see when it’s right in front of their eyes.”

And so, after 25 years, Tex retired, handing the keys to his son. Bound for an endless camping trip, Tex and Dee traveled all over the country before he landed in the hospital in 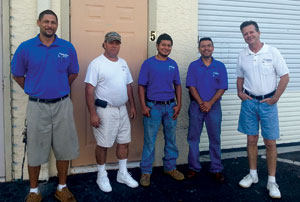 Ken (right) and his staff are proud to be legal and back in business. SUBMITTED PHOTOS

Massachusetts. His passing was unexpected and simply a tragedy. So many loved him and miss him still.

As the family picked up the pieces, they found out that Sampson A.C. was no longer licensed as the licensing was through Tex. This meant closing up shop and becoming relicensed – not an easy task.

With a lot of help from Mike Osorio of Collier County’s Contracting Licensing Office, Ken was provided with answers to all his questions. “He gave me a stack of paper work to fill out and arranged for an appointment to take my exams in Gainesville at the earliest time that was available. I went to Sarasota to get my books, then on to Gainesville for exams. A few days later I was headed back to Marco with passing grades; one hurdle overcome.”

After much more paperwork, Ken was finally legal. “We are now officially Sampson Air-Conditioning and Refrigeration Inc.” he says with pride.

Marc Heidings of San Marco Electric provided one of his warehouses for the business’s new location and as of January 1, 2013, the biz is back.

In just two months, Ken Sampson jumped through all the state, county and city hoops to reopen the doors to a business his father built. Talk about coming from good stock.

Read Ken’s full tribute to his father at the company website at www.SampsonAir.com or call 239-394-3085 for more information.