One Day Cruising the Danube 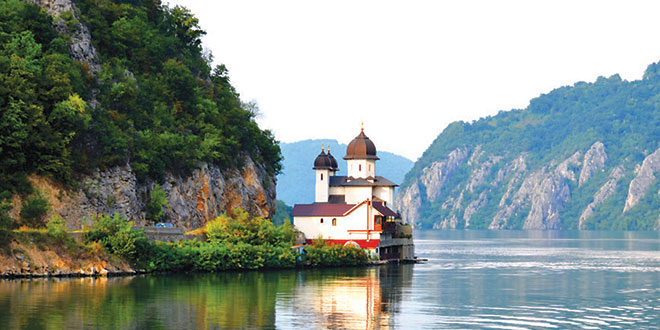 The Cataracts: Some riverside buildings seem to rest on the water. PHOTOS BY CARL AND JOAN KELLY

Our anniversary trip was a cruise on the eastern Danube River. Our ship, the River Aria, is run by Grand Circle Cruise Line. Most of the actual cruising, though, was at night while the passengers slept, and by the time we woke for breakfast, the boat would be docked. So, on most days our waking time was not cruising onboard the boat, but walking about the towns and cities where the boat 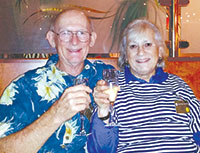 docked; Odd to call that cruising.

One day, however, was spent cruising through the most spectacular section of the eastern Danube, the Cataracts.

The day begins with breakfast, glorious breakfast, one of three such meals every day. Dinner rounds off the gastronomic bonanza with marvelous dishes representing the countries we visited. And, I do not know how to say “no” to food.

After grazing through breakfast, we go to the sundeck and do a few laps. We note the

Along the eastern Danube, many small villages situated nearly on the water.

country we are passing through; farmlands, small villages, larger towns and rolling hills that grow to small mountains. We watch the birds, egrets and herons in the shallows at river’s edge, swans swimming in ragged formation in deeper water.

The ship’s pilothouse is forward on the sundeck level. We knock on the door and ask if we can come in. The captain of River Aria, Eduard Novinsky, is a gracious host. He invites us into his domain. 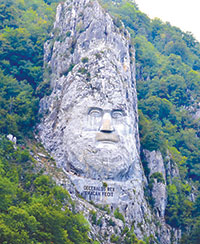 Available to answer any questions on the canals, the river, and the complex electronic navigation system of his ship, he gave us an impromptu tour of the pilothouse, explaining the array of instruments.

By afternoon the small mountains have grown to the Carpathian Mountains on the Romanian side, and the Balkan Mountains on the Serbian. This is the most spectacular stretch of the eastern Danube, the Cataracts. This few miles of river is a succession of steep

It is beautiful. Buildings on the riverbank seem to perch precariously on the water. Two large carvings on the stone cliff walls commemorate one ancient two-year war and its hero, King Decebalus. All 150 passengers are on the sun deck, running about, cameras in hand. This was the Danube we had come to see.

In the evening we sit in the lounge at the stern, toast the Danube, and watch the sun set.