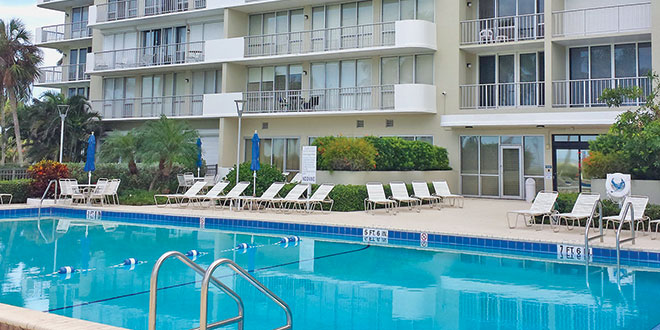 Recently 13 one-bedroom beachfront condos were for sale, ranging in price from $289,000 to $489,900, at five condo buildings. These condos are located at the north and south ends of the beach in Sunset House North, Emerald Beach, Tradewinds, Admiralty House and Apollo. They range in size from 504 to 750 square feet. Monthly condo fees range from $395 at Tradewinds to $659 at Apollo. Depending on where in the building the condo is located, some have direct views of the beach, some look at the beach from the side of the building, and some balconies look over the city. All allow monthly rentals 12 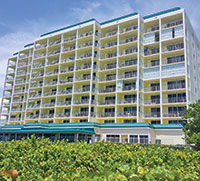 times a year except the Apollo, which allows weekly rentals 52 times a year. The condos feature large pools, BBQ areas and covered parking. None of them allow pets. One bedroom monthly rentals facing the beach in season range from $3,500 to $4,000. One bedroom condos at Apollo rent for $1,300 to $2,000 per week in season. Each of these condo buildings has a different personality and feel.

Emerald Beach was the first condo built on the beach in 1966. Today it is a charming, one-of-a-kind boutique style beach condo with all the amenities today’s residents want. It has been lovingly restored and maintained. It has seven floors and only 48 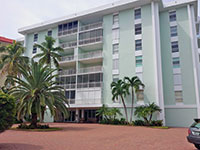 apartments and is ideal for those looking for low density living on
the beach.

Sunset House North was built a few years later in 1971. This mid-size condo has seven floors, 92 condos and is north of Emerald Beach.

The Tradewinds just south of Emerald Beach was built in 1973 and has 12 floors with 204 condos. This is a friendly, social condo with lush landscaping. A new bridge over the sand dunes to the beach is the next project planned here. 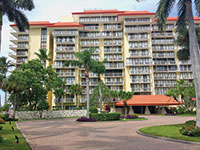 about half a million dollars with no special assessment. Several years ago sprinklers were added in all common areas along with a new smoke detection system throughout the building, including individual apartments. Their latest project involves replacing inefficient lighting with new LED lighting inside and outside the building.

The Apollo with 10 floors and 90 condos followed much later in 1990 and is located at the southern end of the beach. The Sunset Grille restaurant and bar on the first floor of the Apollo attracts residents and islanders alike. The Apollo is popular with investors and part-time residents because it is easy to rent weekly and one of the few condos on the beach that allows weekly rentals.