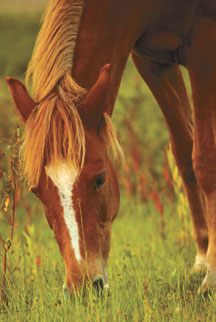 I have always driven a car that reflects my current state of mind, so trading a low slung luxury convertible for a Jeep Wrangler Unlimited was the first sign that change was imminent. After turning the key in the lock, closing Amantea Art Gallery in old Marco, I was ready to pursue the dream that nudged me into the Boston University School of Communication’s photojournalism program. I wanted to be a travel photographer.

Like many of us, life, babies and mortgages derail fluffy dream stuff for big girl responsibilities. Ah, but time, Social Security and an adventurous and patient husband allow for a midnight gallop into “bucket list” abyss.

So, as a prelude, why not have a little adventure on the drive from Marco to Boston?

Five years ago while bringing our boat through the intra-coastal from Ft. Lauderdale to Boston we graced the outer banks of the Carolinas. Sailing past at 20 knots our Captain and self appointed tour guide mentioned the wild horses that inhabit part of that archipelago. As if on cue, a prancing mare appeared and disappeared in the distant dunes—an apparition coaxing our return.

So…last July, leaving Marco to begin our snowbird migration, we pointed the Jeep, now named “One 4 the Road” north. We were determined to visit those majestic equines.

How the horses got there is speculation. However, the most common belief is that they survived from 16th century Spanish galleons that either grounded or shipwrecked near the

isolated 175-string of sand dunes that form the outer banks from the Virginia line to the “Horrible Headland” known today as Cape Lookout.

The wild mustangs off historic Corolla, NC dwell on the Currituck Outer Banks and have survived an amazing 500 years by foraging on sea grass and wild oats. At times they withstood savage hurricanes and fierce nor’easters. Their profound endurance, inexorable spirit, and pure feral wildness are akin to the gut of American ethos.

I imagined photographing them in all their majestic glory, coats shining, long manes flying, stallions challenging each other for dominance, mares and colts nuzzling, herds racing alongside a crashing surf. My long lenses were packed, my data cards formatted, batteries charged and for good measure my portrait lights & stands were stored in the rear just in case I could get any them to pose for a family portrait. My anticipation was visceral and my trigger finger was itchy.

We arrived early afternoon with enough time to secure accommodations for our one night drive by shoot and visit Corolla Wild Horse Museum for information and advice. We learned from the volunteer docent that we could drive directly onto the beach as far as the Virginia border approximately 12 miles. She reminded us that a local posted ordinance forbids going within 50 feet of the horses or feeding them. The horses

can only process what grasses they normally eat.

We were delighted to find there were no time restrictions mainly because I like to photograph in late afternoon and early morning for the most ideal light. I also knew those hours were usually the optimum for wildlife sightings. We would have one afternoon and evening and the next morning to shoot.

We mounted up and headed for the beach pass. Tour companies of Corolla must have struck one heck of a deal with Chrysler because half of the Jeeps ever made were driving on the beach that afternoon. Not to be outdone, pickup trucks were also present in formidable numbers. The sand was deeply rutted and tracks were at least 10 inches deep. Jeeps like mine were roofless and were outfitted with a third back seat. Now, I’ve never driven in four wheel drive in deep soft sand but here’s the deal—you can’t slow down or stop because you’ll get stuck and would have to spend the rest of your life right there in the sand trap probably covered with Jeep tracks. Meanwhile, some other fool is coming behind you forced into the same rut and another toward you at the same ridiculous speed bouncing like a rabid jackhammer.

After about nine miles of playing steroid bumper cars we turned into a dirt pass between the dunes and tranquility returned. We explored the dirt roads that ran

between summer houses and in a short while our tracking instincts became finely honed. I was the first to spot the chunky little road apples and then the hoof tracks, many hoof tracks. Different size ones, oh yeah, I was catching on.

“Shhh”, I instructed my husband, we can follow these tracks, how many horses do you think there are?

“Besides those?” he teased, pointing to a small family whose hoof prints I was now measuring.

Sure enough, there in front of us were four chestnut bays with flowing ebony manes and full streaming tales that almost reached the ground. They meandered and moseyed along the dirt lane, stopping here or there to nibble from a front yard or two.

Soon we met another family, a stunning sable mare with her chestnut blaze colt and blaze stallion nearby pulling and nibbling on beach grass. For a while the colt entertained himself and us by running towards us and then around in circles. I wondered if anyone told him about the 50 foot rule. We backed off and soon realized that most of the horses had gone “inside” the wooded part of the island and probably wouldn’t come out on the beach until most of the vehicles were gone. We decided to pack it in and come back before dusk. The return trip was as death defying and as exhausting as the trip out. Thoughts of a 12-mile

return as human agitators wasn’t appealing but a surprise reward was waiting for us and I was about to learn another wildlife photographer lesson.

Returning to the outer beach just before sundown was a little less threatening. Most of the cars were gone or leaving and the tide had receded so that there was plenty of room for two way traffic. We traveled on harder packed sand and out of the deep ruts of the afternoon. This time we went about nine or ten miles and waited in the deep rich light of what promised to be a travel photo sunset. We waited and waited. Nothing.

The sun met its promise and then slipped below the still juicy but darkening horizon. The light was gone and it was time to go home. No horsey show but maybe dawn would be more generous. I wished we could sleep right there and a better photographer probably would have.

Sadly I agreed and brushed the sand off my feet, climbed aboard and we commenced our disappointing retreat.

“Stop, stop, stop!” I pleaded in an excited throaty whisper. Two chestnut mares pranced over the dunes with an obedient colt in the rear and then they began walking the beach just in front of us. Geoff, who hadn’t seen them at first, was confused but obliged my plea. There was no time to change to a faster lens or set up a tripod- -which

Photographers rarely have the chance to be in the photo! Kathleen enjoys the opportunity – PHOTOS BY KATHLEEN DOUGLAS

I really needed in such low light.

“Can you put the headlights on and slowly follow me?” I asked Geoff.

Mindful of the 50-feet rule I began walking slowly behind them with my camera and 300mm lens up to my eye. The steady beam of the headlights was lighting the horses from behind. I wasn’t sure what these horses were going to do but I wanted to be ready.

What I wasn’t ready for was the haunting nasal snort, puffing and whine of an enraged stallion. I looked to my right in time to see the blackened shadow of a stallion flying over the top of the dune. It was an ebony wingless Pegasus airborne, mane and tail flying and he was charging toward me!

I suppose you want to know if I got the shot. Yes, I did–several in fact. I moved toward the broad side of the jeep but would not have been fast enough if he hadn’t veered to the left and, at a full gallop, circled old “One 4 the Road” once and then once again. Still at a full gallop, he stampeded the mares and colt running them up the beach and over the dunes. As for me, I was watching, frozen next to the jeep. And yes, he took my breath away.

The shot? I’ll never show it. It’s too darn blurry!

“The 50 feet is for your protection as well as the horses. As docile as they may appear, they are wild animals after all.” the docent counseled.