Once a Waterman, Always a Waterman: PART TWO Frog Ellington finds a way 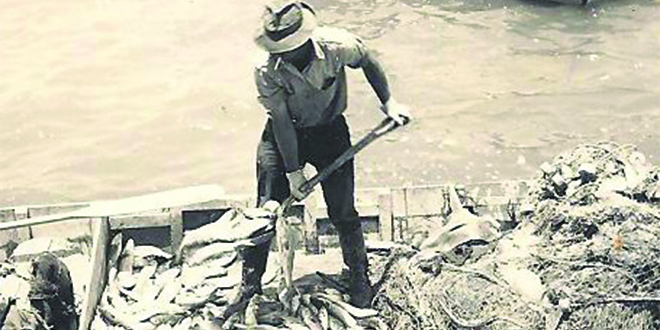 Submitted Photo | This 1948 photo of Florida mullet boats shows that the design has not changed over the years. The size of the catch has, however. Catch pictured reflects the large hauls brought in by gill nets.

Frog Ellington’s heart has been out in the bays and creeks of the 10,000 Islands ever since he moved here as a 10-year-old in 1965. Having fished them since 1972, he has committed them to memory and depended on them to feed his family. He is still doing it today, despite the obstacles the state has imposed on the fishing industry. The 1995 gill net ban left fishermen with no choice but to go out of business or jettison their gill nets and invest in seine (SAYN) nets. Gill nets could be stretched across coastal creeks and bays and left for a couple days if necessary. No fish could escape from a gill net, which was invisible to them. Fishermen were permitted to set as many gill nets across the underwater mullet highways as they pleased. The mesh openings were only big enough for the head and would entangle the fish by their gills if they tried to back out. Seine nets on the other hand were only set where schools of fish had already been sighted, more or less surrounding the fish and then hauling them in – a lot more work for a lot less fish. Seine nets could be set from a shoreline or paid out from the stern of a mullet boat, but had to be done over and over again on the same day. Seine netting was more time consuming and labor intensive than gill netting.

Mullet boats or skiffs were once ubiquitous in Florida and in the coastal areas of North Carolina. The flat bottom boats were shallow draft and easier to build for fishing in shallow sounds and estuaries, where mullet like to congregate. The boats are powered by an outboard motor that becomes an inboard engine when typically mounted in a well, toward the bow. The bow mounting keeps the propeller away from the nets, which are worked from the stern of the boat. The boats are steered from a bow or center console, leaving the rear business end of the boat, clear and unobstructed. Before the advent of the outboard motor in 1900 (invented by Ole Evinrude, a Norwegian immigrant), the mullet skiffs used only sail power to get out to their fishing grounds and set their nets. The mast, like the motors which came later, was also set near the bow. In the 1990s the Florida mullet fishing industry suffered a double whammy, when, hard on the heels of the gill net ban in 1995, there was a drop off in demand for mullet roe, thought by many to be the result of a depressed Asian economy. Since 1995, the surviving mullet fishermen have used runaround seine nets to harvest the fish. Floats are attached to the top of the net and the bottom is weighted. When a school of fish is sighted, one end of the net is deployed with a buoy and a small weight. The weight creates enough drag to pull the net from the stern as the boat encircles the school. The net is then immediately hauled in by hand over the stern and the catch is unloaded as the net comes in. The net is piled in the bottom of the stern for the next run, which could come around the next bend or not until the next day. With the decreased demand and draconian restrictions, only the most hardy and determined fishermen kept going after the mullet. Frog Ellington was one of them.

Based on his knowledge of area waters and the proclivities of the mullet (Frog thinks like a mullet), Ellington was able to survive – until in October 2015, when the Florida Fish and Wildlife Commission (FFWC) threw him another curve ball. Having already restricted the size of his nets to 500 square feet, the FFWC was now limiting the number of nets he could deploy. 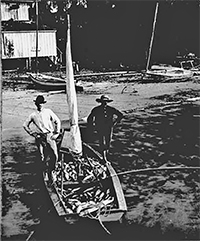 Fishermen pose with their catch in this 1896 photo of a mullet boat. Prior to availability of outboard motors in 1913, sail power was the only way to get to the fish.

“They were telling me that I could now only use two nets,” Frog said, “Two nets per boat is what they said. All I had was one.” This would have made a big difference in the size of each haul by halving the number of nets he could use. Except on occasion, when his son Travis goes out with him, Frog operates a one man, one boat operation. This is the way he has always done it and he had no plans to change. But adding another boat to his fleet? For a lot of reasons this wasn’t going to work. Working with only two nets would have been a deal breaker for Frog.

With the determination and ingenuity also displayed by some fishermen to the north, Frog built a 9-foot wooden skiff, covered it with fiberglass, and loaded it onto his 21-foot mullet boat. Voila…now two boats instead of one. The better-than 100-pound skiff would be muscled in and out of the boat as necessary and poled to a desired destination. “That way, when coming onto a large school of mullet, I could run an additional net or two from the [skiff].” I noticed that the skiff was duly licensed but had no motor. There was hardly enough room for Frog and his net.

“Every once in a while, a guy from the FFWC comes over while I’m fishing and askes the same question” Frog said, “He would say that any additional boats had to have their own propulsion, and asked to see it. I just show them my pole, and they leave me alone.”

For the past six years, Frog has been operating out of one of Stan’s docks, adjacent to the parking lot across the street from the restaurant. His son Tadpole rents an adjacent slip from which he runs a blue crab operation. I would stop by occasionally to chat and take pictures of the humongous and not so humongous hauls of mullet Frog was bringing in. Getting the fish out of the boat and over to market is another backbreaking process, that hasn’t changed much in 100 years. As much as 500 pounds of fish is offloaded by hand. Frog tosses or shovels the fish from the iced fish boxes on his boat, into tubs or baskets on the dock next to his boat. The tubs are dragged to the rear of his pickup truck, hoisted up to his tailgate and then dumped into a permanent box in the truck bed, capable of holding upwards of 500 pounds. Ice is then shoveled over the fish and the box is closed. An extra box is added as necessary. Frog then transports his catch over to Naples restaurants and fish houses where, Frog says, the price fluctuates between 10 cents and $1 a pound. Counting the travel, this amounts to a mostly labor intensive eight to 10-hour workday. Weather permitting, Frog goes fishing six days a week. He takes off Sundays, as Steve Gober needs his entire parking lot for the large crowds on Sunday afternoon.

Frog prides himself on fulfilling his contracts with local merchants and gets stressed out when for some reason (usually weather) he can’t deliver as promised. Over time, he has developed a reputation for dependability based on his long record as a top mullet fisherman and productive association with area merchants, delivering fresh caught mullet to them daily. I wanted to see how he did it. Finally, in September of last year, more than a year after I had initiated conversations with him, he agreed to take me along on a mullet run.

Next edition – A day on the water with Frog.