On the Road Less Traveled With the Swallow-tailed Kite 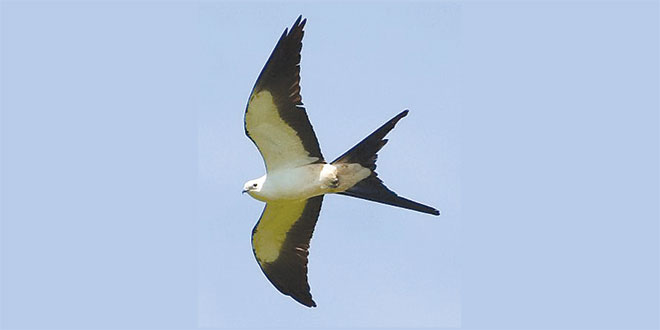 It was a typical drive home from work on April 22 when I noticed, out of the corner of my eye, a bird flying. Its movement was a bit different than other area birds, and then I saw its tail. I smiled, and said to myself, “They’re back.”

I am, by no means, a professional birder, but seeing certain species at specific times of the year helps me understand that there is an order on this earth — a system that has been in place for thousands of years.

This was my third such sighting of this particular bird this year, in three distinctively different locations around the county. Migration is underway, and it is time to welcome back Florida’s Swallow-tailed Kite.

Many of us may be aware that a lot of birds migrate to or through Florida at various times of the year, coming from the Northern United States, Canada and some as far away as the Arctic. Most of these birds travel migration corridors known as “flyways.” There are four major routes used by these transients: Pacific Flyway, Central Flyway, Mississippi Flyway and Eastern Flyway. They follow coastlines, rivers or mountain routes to reach their destinations. Not so with the Swallow-tailed Kite. It comes here to breed… from South America.

These kites arrive this time of year and will stay until the fall. More than two-thirds of them nest in Florida, and the other one-third will travel to six other states around here. Their range was much more extensive, but the loss of habitat has brought them to this region. They come from as far away as Peru and Brazil.

This black and white raptor will weigh less than 1 pound, will measure 20-22 inches long and has a wingspan of more than 4 feet. It uses little effort while flying and, unlike many other raptors that land in order to feed, this one will eat “on the wing” (while flying). It will rarely flap its wings, but can continuously rotate the tail — up to 90 degrees — to make sharp turns or change its course. It is one of the most acrobatic raptors to visit our area. They are easy to spot, having a white body, black-tipped wings and a deeply forked tail.

It is nesting now in South Florida, primarily in slash pine trees or the Australian pines. It will gather twigs and Spanish moss to secure its home, and many return to the same nest each year. Their preferred habitat is swamp areas, lowland forests and freshwater or brackish marshes. They feed primarily on flying insects, but they can feed their young anything from tree frogs and small snakes to lizards.

Once the young have hatched, they will fledge and begin their flying skills in about six to seven weeks. They will learn to eat by watching their parents, and mom and dad will be close by when the youngsters take their first few flights. After honing their techniques for a few more months, they are all ready for the travel back home to their winter residences.

The signal to begin their journey back home comes from Mother Nature…a change in the tradewinds. This is a stepping stone for them, an instinctive action that will assure the survival of the species. They know leaving too early on unfavorable winds could cause their demise.

And so the journey begins. These unique birds will leave our area and head toward the western tip of Cuba. Some will stop there, while others continue a direct flight across open waters to the Yucatan Peninsula. This is a migration route that they have used for thousands of years. Central America will be home for a few, but many more will travel further down the coast to portions of Eastern South America. Even more will cross the mountains to take up residence as far away as Peru.

They will be gone until next spring, but there is one thing that I know. I’ll be driving home on an April day next year, and something will catch the corner of my eye. I’ll look up, and once again, I’ll smile.