On Education Day, Leadership Marco Goes Back to School 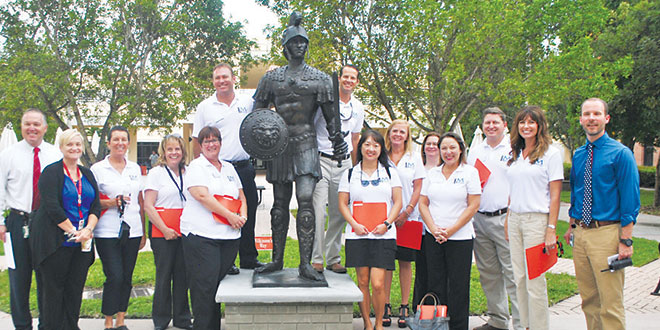 Students find time for a group photo in between tours at Lely High School. PHOTOS BY JESSICA HERNSTADT

Wednesday, September 9 brought another day of learning to the Leadership Marco Class of 2015.

The Leadership Marco (LM) students started their Education and Youth Day in Naples, with a breakfast and tour of Lorenzo Walker Technical High School, which offers programs of study from airplane mechanics to veterinary assisting.

LM student Steven Purcell said he found it “amazing all the options students have,” also noting that the classes seemed more job-oriented “catering to careers in all areas.”

The Leadership Marco class travelled to Lely High School, where they met with Lely’s new principal, Ryan Nemeth. After a presentation, they were given a tour of the high school, which included visits to different

classrooms to see the teachers and students in action. The students enjoyed a tour of the Innovation Lab, an innovative entrepreneurial/business class.

After a busy morning, students returned to Marco Island, and were given a grand reception at the Marco Island Academy (MIA). The Leadership Marco class was greeted by MIA students Patrick Michel, 12th grade, and Caitlyn Schmidt, 11th grade, and given blue leis and a school tour. Melissa Scott, a member of the Leadership Marco Class of 2015, and also the school’s beloved principal, was given a special pink, (her favorite color), lei by students.

Melissa Scott wore multiple hats during the day. She organized and moderated a panel of 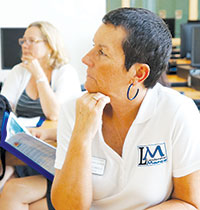 students, grades 9-12, which allowed the Leadership Marco class to ask questions and interact with MIA students. MIA students described to the LM class how they received more ‘one-on-one’ time at MIA than at other schools. Students also described the many extracurricular activities that are available at the school, which many islanders may be unaware of.

A visit to the Greater Marco Family YMCA provided a history from board president Allyson Richards, who, along with executive director Cindy Love, explained the YMCA’s role in education and youth services in the community. Cindy Love is a graduate of the Leadership Marco program.

Education Day was sponsored by Regions Bank, which enabled the use

of a bus to shuffle students from school to school during the heavily scheduled day. Regions’ Raul Medina, a 2010 LM graduate, joined the class for lunch and praised the Leadership Marco program for its education as well as camaraderie.

LM student Marisa Cleveland tells us that the most interesting part of the day was seeing “the new curriculum at the public schools.” She also noted how all the faculty and staff seemed very “engaged.”

The day ended with a panel discussion 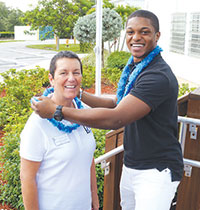 During the course of the day, the LM class interacted with students, educators and administrators, providing them with a unique opportunity to learn about the education system from many viewpoints.

For more information about the Leadership Marco program, contact the Marco Island Chamber of Commerce at 239-394-7549.