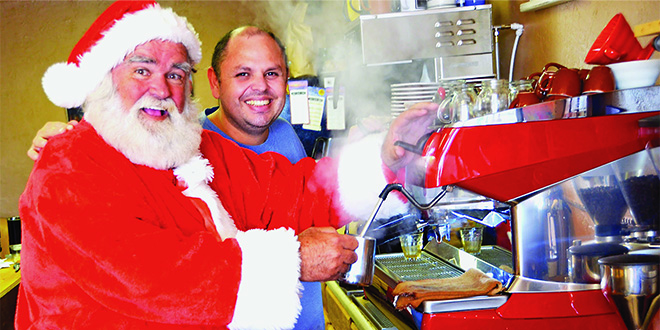 Submitted Photo: Santa with Oscar at Wake Up Marco making a cappuccino.

Marco Island resident Dennis MacDonald first began growing his beard about three months ago. His friends down at Wake Up Marco, a local coffee shop, had been encouraging him to enter the Ernest Hemmingway lookalike contest that takes place annually in Key West. Dennis liked the idea and decided to pursue it.

“I had the beard and I started growing it a little bit out,” said Dennis. “I made the application out and sent it in and they never got back to me. It might have been too late.”

Although disappointed at his failed attempt to emulate the great American writer, Dennis was undeterred. He decided to keep the beard, growing it out even longer. As his beard grew and grew people began noticing him, not for his resemblance to Hemmingway, but rather to that of Santa Claus.

Then one day while Dennis was drinking coffee at Wake Up Marco he was approached by Chadd Chustz, environmental specialist to the City of Marco Island. Chad was planning a fundraiser for the Florida Fire Juniors, a local non-profit youth soccer program for girls and boys, and asked if Dennis would help out as Santa. Dennis already had the beard going and was 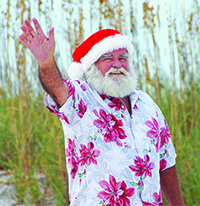 essentially half way to becoming Santa Claus, so he thought, why not?

Once Dennis donned the traditional Santa costume, it became clear that it was a role he was meant to play. And it’s a role that he’s fully committed to. Dennis volunteered for Chad at Island Trends, where Chad also works as the marketing director. There Dennis posed for pictures as Santa, and in doing so raised a couple hundred dollars for the youth soccer league.

Dennis’s beard is rounded and full and white. It sits low on his rosy cheeks, accentuating them and giving him a jolly appearance. His eyebrows are bushy and speckled with grey hairs. Unlike the average mall Santa, his hair is authentic. He even has the kids tug at his beard to prove to them that he’s the real deal.

A particularly touching moment during the fundraising event came when Chad’s young daughter approached Dennis, thinking he was the real Santa Claus.

“She’s asking me questions and I’m asking her questions and we’re singing, ‘Rudolph the Red Nose Reindeer,’ and she looks at me and says, ‘I love you, Santa,’” said Dennis MacDonald.

Dennis has a few more events to complete as Santa. He’s going to stop by some 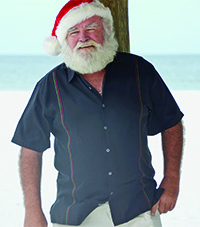 of his friend’s houses as Santa to surprise their young children. Before he goes he’ll be supplied with information on what classes they’re in in school and what they want for Christmas.

“Little kids come by and they say, ‘Ma, that’s Santa,’” said Dennis MacDonald with a smile.

It seems that Dennis has found his niche in the most surprising of ways. It may be construed as somewhat ironic that his initial intentions were to look like that of the complicated and sometimes controversial figure of Ernest Hemmingway. Instead he became the idyllic, jolly and mythical Santa Claus character. And it’s a role to which Dennis has fully embraced. It allows him to be a part of the magic for the children of Marco Island and it seems that he couldn’t be happier.

While Dennis does love the beard, he’s thinking about shaving it off after the holidays. He doesn’t want to look like Santa Claus year round.

“After Christmas, I’m thinking about having a party, beard shaving party,” said Dennis MacDonald. “Then the kids won’t recognize me. No one will recognize me. I look different without the beard.”

Check out Dennis Macdonald’s Facebook page at: www.facebook.com/marcoislandsanta. See more of Dennis as Santa at the @Islandtrends Instagram page!