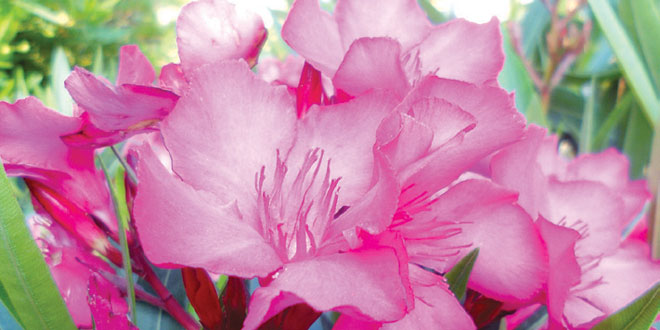 If you’re looking for a colorful hedge shrub or a showy specimen plant that will bloom profusely and nearly year-round, try an Oleander (Nerium oleander). This fragrant (some varieties) evergreen shrub or tree will bloom from spring to fall with pretty orange, pink, red, white or yellow flowers. Oleanders display their colorful single or double-flowered clusters at the end of their branches. They grow up to 12-feet high and almost as wide, hence a great screen plant. Once extremely popular in many southern landscapes, these shrubs have started to make a comeback.

They can be grown successfully in almost any soil, are salt-tolerant and drought-tolerant once established. Oleanders do

not demand fertilizer, but a spring and fall feeding will boost their maximum flowering potential and keep them healthy. Oleanders love FULL Florida sun, which makes them perfect for a southern exposure. They’re also popular for highway beautification projects, because of their heat and low-water tolerance. You will frequently see them planted en masse and thriving along the sides of roadways. Imagine how good they’ll look with optimum care in your garden. Oleanders can be grown in partial shade, but will produce fewer flowers and become leggy.

They should be trimmed in the fall, so that their new spring growth will be shaped nicely. Trim just above a node, which is where 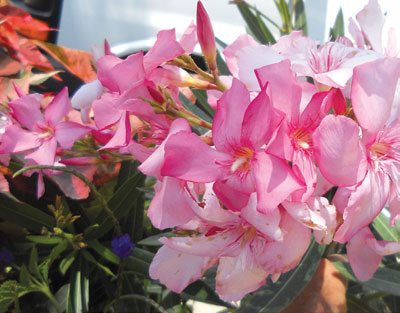 the new leaves will sprout. If allowed to grow naturally, oleanders will become a huge mound. They can be controlled, however, with a hard pruning. Oleanders (or any other plant for that matter) should never be trimmed into a box or ball! To promote continuous blooming, dead head often. Also, remove all suckers that grow from the ground and out of the base of the trunk. They only suck moisture and nutrients from the host plant, resulting in a scraggly host plant. Don’t worry too much about freeze damage. Although its leaves will drop, oleanders will recover quickly in the spring.

Besides aphids and scales, be on the lookout for rust or 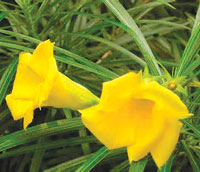 orange-colored caterpillars with black hairs, which look very similar to the larva of the Gulf Fritillary. These hungry caterpillars can strip an oleander plant in no time at all. They can, however, be controlled by simply pruning or using Bacillus thuringiensis (Thuricide). The key word is control; because these caterpillars will eventually turn into handsome day flying moths. Sometimes referred to as the American moth, this patriotic little fellow has blue wings with white dots and a red body.

Last of all, a warning. The oleander plant is toxic to humans and pets, so it should be planted with caution, like so many of Florida’s beautiful landscape plants. So stay out of the garden when you’re hungry.