Old Marco Lodge: Past and Present 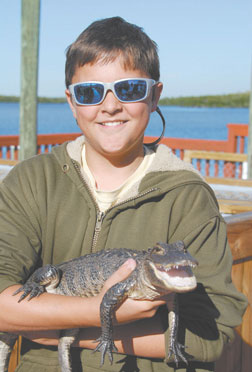 Young Kevin with a baby alligator.

Wanna catch a little history this weekend along with some fun and hold a baby alligator, too?  Try the Old Marco Lodge right here in Goodland and you will see what I mean.

First the history.  The Old Marco Lodge is by far the oldest up and running place in Goodland. The building was actually built in 1869 on Marco Island where it was a general store which belonged to W. D. Collier.  He was the enterprising guy who invented a motorized dredge for the Marco clamming industry which grew for years. But in the early 20th century the clam industry died out and was finally ruined by a strong storm.

So we might ask, “How in the world did this W. D. Collier general store get to Goodland?”

By all accounts it was moved here in 1965 and became a restaurant.  For the last 13 years the Ballante family has owned the Lodge. It’s great for lunch, drinks, dinner, music or dancing. Try sitting on the huge deck and enjoy the unsurpassed wide angle waterway. As far as views go, it is the sweet spot of Goodland.

Now for the baby alligators. Who would have ever guessed that alligators would be associated with the Lodge?  Not me, that’s for sure.

I was real curious so I went to see for myself.  It turns out that Kevin Hennings and his son, Kevin, a student at Marco Island Academy, are fascinated with alligators and anxious to educate the public about their habits and life journey.

Definitely a unique hobby or vocation depending on how you see it, young Kevin started handling baby alligators when he was four years old and he is now fourteen.  Bright and impressive, he told me he wants to be a herpetologist.  FYI – I didn’t even know what that was!  Do you?

How does a little guy get

so interested in alligators?  Kevin told me, “I asked my Dad to take me to Gatorland in Orlando when I was four.  There I met the owner Tony Pigtain and he and my Dad have been my mentors and supporters ever since.”

So here I am looking at the eighteen babies that are in a custom built cage with water and plenty of places to sun themselves and I’m trying to decide if I want to hold one.  “Ok,” I said to myself.  “This is a once in a lifetime opportunity, right?”

Young Kevin reached in and pulled one out, taped his mouth shut which already looked menacing, and before I knew it I was holding the guy.  Nothing to it!

Don’t get me wrong, I wouldn’t call these guys cuddly.  You wouldn’t want to hug them, but at least I can say I have held an alligator.

“How much do these guys weigh?” I asked as I gazed into the eyes of this creature. “Anywhere from 5 to 10 pounds and they are one to four years old.”

Young Kevin told me a story of a little four year old girl named Elle from Colorado who was visiting her Virginia grandparents on Marco Island.  She held a baby alligator, had her picture taken and used the photo for show and tell back home.  Best show and tell or what!

Some folks don’t like the idea of alligators in captivity and that’s okay. But the Hennings are giving us the opportunity to learn about them and that’s okay too.

I recommend the Lodge as a great place to watch the Goodland Mardi Gras Boat Parade February 18th – also to listen to the Smokin’ Joe and Konnie Band on Sundays.  After lunch or a drink or two, wander over to learn about the baby alligators. You won’t be sorry. P.S. You can feed them at sunset!