Oil in the Estates: Mineral Rights and Clean Water for Collier at Center of Debate 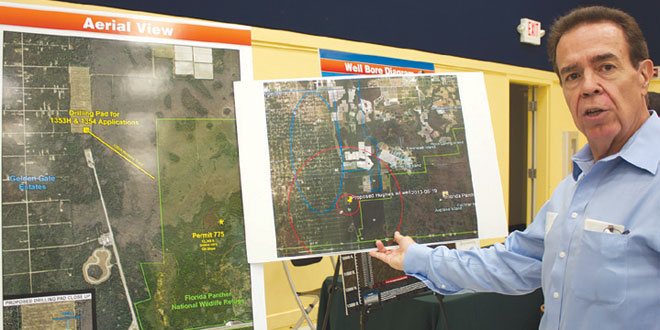 The citizens of Golden Gate Estates have set a precedent for the state of Florida, and they are ready to set some more.

On September 10, the DEP held its first-ever public meeting regarding a specific permit to drill for oil on private lands. Held at the Golden Gate Community Center, due to the uproar of residents regarding the location of a possible horizontal oil well adjacent to many homes, the DEP attempted to provide as much information as possible for those concerned or simply curious.

On May 30, an initial meeting was held by District 5 Collier County Commissioner Tim Nance after a number of residents received a letter from the company Total Safety asking them for contact information so they could be evacuated in case of an explosion, leak or other drilling disaster. Residents within 1,000 feet of the proposed well received the letter.

“That person (who left the notes) was fired for doing it that way because that was not the best way to make it known,” said Darrell Land, biologist for FWCC. However, he did believe that a public notification would have had to happen regardless.

Outraged, residents came to the meeting that was supposed to answer questions, but seemed to only create more.

A second meeting was held on June 19, also by Nance, to provide further information. The answers provided regarding the Texas-based Dan A. Hughes Company’s permit to drill on private lands owned by the Collier Corporation still were not sufficient for many of the local residents. 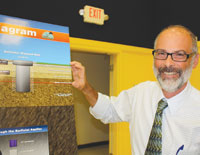 indignation is how this got started,” stated Joe Mule, Golden Gate Estates resident and President of Preserve our Paradise, an organization started by local citizens to combat the proposed oil well. The group began with petitions on MoveOn.org and Change.org, generating more than 4,000 signatures, as well as setting up a website, preserveourparadise.org, and spreading information through Facebook and other social media outlets. They wrote guest commentaries in local papers as well as letters to the editor. On August 31, the group led a peaceful protest, beginning at the Naples Pier and ending at the beachfront property of Governor Rick Scott’s home in Port Royal. Over 100 people, including members of Greenpeace came out, formed a ten-foot oil derrick and placed it on the beach in front of his home, begging the question to the Governor, how would you like an oil rig in your backyard? He wasn’t home to answer.

As the momentum of Preserve our Paradise grew, the Florida Department of Environmental Protection made the decision to hold the September 10 meeting.

In attendance were the DEP’s permitting agents and geologists, representatives for the Florida Fish and Wildlife Services and the Florida Fish and Wildlife Conservation Commission. Commissioner Nance was also present throughout the evening. Residents were openly disappointed that representatives of the Dan A. Hughes Company and the Collier Corporation were not in attendance.

The meeting, where tables were set up around the room to speak to different agency representatives in a one-on-one forum was helpful to some, but insulting to others.

Provided by PRESERVE OUR PARADISE

Michael Ramsey, President of the Golden Gate Estates Area Civic Association, had a different view. “I think it’s great because people are learning about the county’s history. Nobody knew about the oil wells; they did not know that we’ve been pumping oil out of (Florida) for the last 50 years; they did not know that Collier Enterprises owns almost all the mineral rights in Collier County – under your house or under your business – and this history is coming out which is good.”

The September 10 meeting offered large posters of myriad subjects, one featuring the many sites where oil drilling has been attempted in Southwest Florida as well as where it is being produced. There are currently seven active oil fields, four of which sit entirely within Collier County.

Ramsey’s second point has had residents of Golden Gate in shock. “It’s perfectly legal,” explained DEP Geologist Pierre Bruno, “but what the Collier’s did was they sold off the land rights but they kept the mineral rights. And it’s written into law that they’re allowed to go for their minerals.”

As to the horrors of the Collier Corporation coming in and insisting on mining beneath people’s houses, Bruno stated, “Technically, yes. Logically, no.” 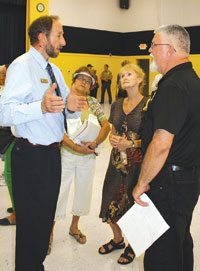 there’s the question of road usage. Preserve our Paradise members have expressed outrage that the Hughes Company already has large trucks driving up and down Desoto Blvd., a two-lane country road with no sidewalks where six times a day, children wait for the school bus. Residents inquired about a separate road being built, but were told that wouldn’t be possible.

“The reason they picked this location is because they thought it was remote… and you’ve got a bunch of ‘hicks’ down there that won’t know what’s happening, but we are like hornets – and I’m one of them – that’s fighting to stop this,” stated a concerned Mule. “It’s the fact that this could happen right here. That people could do such a thing, and they thought that they could get away with it.”

Mule brought a map of his own to 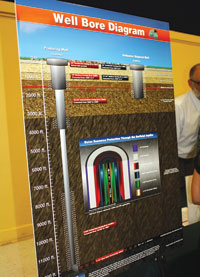 A diagram of the proposed horizontal drilling and waste well.

compare to the large map the DEP showcased that pictured the drill site. He pointed out that the DEP’s map was zoomed in and cut off to the west to make the area around the drill site look desolate. His map, zoomed out, depicted the blocks of homes just to the west as well as the evacuation zone and danger zone, much of which lie over a prime water aquifer. “This blue oval is the water well field for Naples. It is the water well field for Collier County. So, people in Naples that think this is a Golden Gate Estates problem, it’s not. It’s everybody’s problem.”

The use of certain chemicals such as barite, sodium chloride Mica M, Fiber M and MF 55, to drill through these prime aquifers – a common practice – has Preserve our Paradise heavily concerned of the consequences of a leak of any kind into the County’s drinking water. Of course, crude oil spills are also a concern.

According to the DEP’s Paul Attwood, the concern for a spill is minimal because the likelihood of finding oil is minimal. “The results of this well and the drilling, and I don’t think they’ll drill anymore (than one on the site), is that this is considered a ‘wildcat.’ Typically, ‘wildcats’ in the United States have a one and ten chance of being productive.”

Attwood did calm the fears of many when he stated that, “they’re not planning on fracking in Southwest Florida.” According to the DEP, if hydraulic fracturing were to 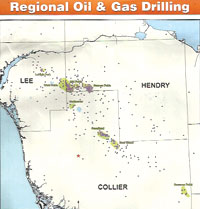 The dots represent areas drilled for oil or gas over the past 60 years. Green areas surrounding dots represent active wells that are currently producing oil. Map provided by the DEP

take place, a permit would have to be submitted just as the horizontal oil well permit was submitted by the Hughes Company.

Still, the proposed type of horizontal drilling has Mule worried. In a nutshell, the drill extends to 12,000 feet below the surface and then turns at a right angle, moving through a specific “layer” of the earth that is believed to contain oil. “What happens when you deplete the oil and you have a big old air pocket in here? Sinkholes! We’ve got an accident in the making, and people aren’t going to put up with it.”

Commissioner Nance seemed to disagree with Mule’s concerns. “There’s a lot of anxiety; there’s a lot of misinformation out there. Some people have a fundamental dislike of petroleum, but the fact of the matter is it’s across our nation. There’s oil wells of all different kinds and there’s been a lot of oil prospecting in Collier County for a very long time. It’s getting to the point where oil is so expensive and technology has improved, so it’s going to be here. It’s been here since the 40’s and it looks like there’s going to be more of it. They’ve extracted 120 million barrels total out of Collier County so it’s not anything new. It’s new to residents, and residents are suspicious and they’re afraid. Misinformation and sensationalism aren’t going to better the situation.”

Nance also stated that it is solely the responsibility of the DEP and SFWMD to regulate oil extraction and mining, but discussed

Residents drilled Ed Garrett on why the DEP does not do its own environmental impact studies for oil well permits, instead relying on studies by third parties hired by companies such

the County Commissioners’ desire to be more hands on in the process. “There was an agenda item that passed this morning at the Board of County Commissioners, which passed unanimously, all five commissioners supported it, to look into what we can do regarding regulating the sites of oil wells drilled and regulating how it impacts the county. So if it has a negative impact on the county, then we can step in and do something about it.”

The DEP is to issue a decision by September 30. From there a 21-day comment period will take place. This is another first, brought forward due to the actions of Preserve our Paradise and the citizens of Golden Gate Estates.

“If this permit goes through, we know what’s going to happen. Pipes are going to corrode; concrete is going to crack, everything is going to be exposed to the toxins,” said Mule.

“These people are poisoning us and for one thing, and one thing alone. The greed of the Collier family. That’s all it is. And I have to tell you, reason and logic would dictate that this should not be happening, but unfortunately, greed is the antithesis of reason. So, we’ll see.”

For more information, here’s all you should need: