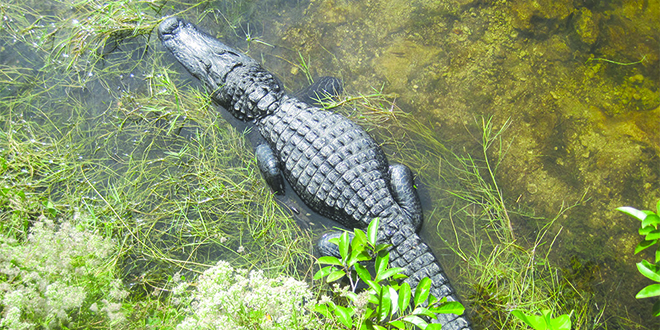 Photo by Bill Golladay | A gator sunbathes in the 720,566 acre Big Cypress preserve.

March 27 was the date set for the Burnett Oil Company to begin the process of surveying for oil and gas resources beneath Big Cypress National Preserve in Florida, even as a federal judge had yet to rule whether the work could proceed.

The National Parks Conservation Association, Natural Resources Defense Council, Conservancy for Southwest Florida, Center for Biological Diversity, Earthworks, and South Florida Wildlands Association are challenging that approval. According to the groups’ lawsuit, the environmental impact of driving massive trucks and equipment through sensitive wetland areas has not been adequately studied. The parties appeared before the U.S. District Court for the Middle District of Florida on the groups’ Motion for Preliminary Injunction on March 3, and are still awaiting a ruling.

In its latest court filing, Texas-based Burnett Oil Co. cites a finding by the National Park Service on March 10, 2017 that, in its view, conditions in the preserve would be dry enough for the company to begin seismic testing as of March 22. Burnett Oil claimed that it would be ready to begin preliminary scouting March 27, and seismic testing on April 19.

“We are extremely disappointed that Burnett Oil will not wait for the court to rule on our case before starting work inside the Preserve,” said John Adornato III, National Parks Conservation Association’s Sun Coast Regional Director. “The impact of seismic testing in the national park site has not been adequately studied, and moving forward in the middle of a court case will put Preserve resources and wildlife at risk.”

Big Cypress National Preserve was transferred to the federal government in 1974. At that time, many of the minerals (namely, oil) located beneath the preserve remained privately held. However, the federal government has the authority and responsibility to regulate the exploration and extraction of privately-owned minerals, and may limit surface access to protect the ecological integrity of the Preserve.

“This kind of development is incompatible with the mission of Big Cypress, and may permanently damage the landscape of the Preserve,” said Matthew Schwartz of the South Florida Wildlands Association. “Driving enormous vehicles off-trail and over sensitive wetlands will likely to lead to severe impacts on soils, plants, hydrology, and endangered wildlife.”

The seismic testing alone can impact endangered species, defoliate and flatten vegetation, alter hydrology, and compact and rut sensitive soils, among other damage it can cause.

“The Big Cypress is an essential area for wildlife species, including the red-cockaded woodpecker, wood stork, and Florida panther” stated Amber Crooks of Conservancy of Southwest Florida. “It is also an important landscape for people as it provides important underground drinking water resources.”

“The beautiful natural landscape and precious wildlife in Big Cypress attract some 1.1 million visitors a year—so it’s not only environmentally, but economically, important to the state of Florida,” added Alison Kelly of the Natural Resources Defense Council. “The National Park Service has a duty to protect Big Cypress for the use and enjoyment of all Americans and future generations. To that end, it should have fully studied the environmental impacts of the oil company’s unprecedented seismic exploration proposal prior to allowing it.”

“Big Cypress is a national treasure, so we can’t let it be ripped up by these massive trucks,” said Jaclyn Lopez, Florida director of the Center for Biological Diversity. “This precious resource deserves so much better.”