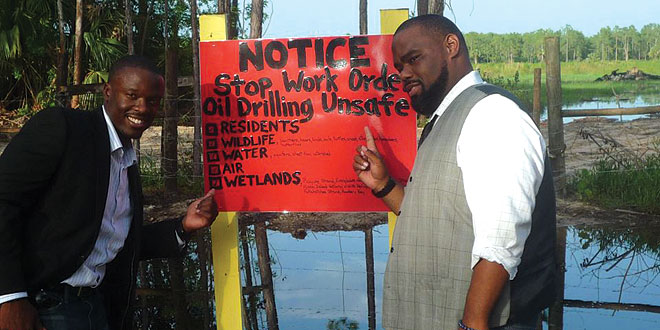 The Dan A. Hughes Company is waiting for the Florida Department of Environmental Protection’s decision as to whether or not they can have a permit to drill for oil and gas in the Golden Gate Estates area of Naples, Florida. The demand for these resources is always high, and our reliance on foreign countries is increasing. This does not mean that oil drilling corporations should be allowed to search for crude close to homes, nature preserves and wildlife sanctuaries. Something is drastically wrong with this possibility. When did people, their homes, the native wildlife and the sensitive ecosystem become so insignificant to the governmental agencies that they would jeopardize the citizens and communities they serve? I never thought that my government would put my life, my family’s lives, my pets’ lives, my neighbors’ lives and my entire community in danger.

The People of Golden Gate Estates

Our government officials like to call us constituents or residents of the communities they serve, because they don’t want to recognize that we are living, breathing, and feeling voters. We live in Golden Gate Estates because we prefer a rural atmosphere and being close to the natural world; because we have an affinity for nature and don’t want to live in cookie cutter neighborhoods or gated communities, the government agencies can allow companies to potentially disrupt and destroy our lives.

The area in which the drilling is proposed offers only one road for both directions of travel. In the event of an emergency, there would be hundreds of families trying to evacuate the immediate area and perhaps thousands, if the problem was severe. Does the Florida Department of Environmental Protection feel that the families living in Golden Gate Estates are expendable? The Dan A. Hughes Company and the government obviously do. The pursuit of oil and gas is apparently more important than the people and their pursuit of happiness.

It all comes down to the facts. This potential drilling will affect our way of life. There is the high risk of seepage into our water supplies. Even if everyone was able to leave in the event of an emergency, our water and soil would be useless. Think about it! When the Gulf spill occurred, the cleanup workers had breathing issues, sore throats and some severe respiratory problems. They had protective gear, too! We have nothing but the potential to die.

Many of us who live in Golden Gate Estates do so because we respect and enjoy living side by side with the wildlife here. Yes, there are dangerous animals out here including bears and panthers. Those of us who choose to live in this area embrace this and understand that these are dangerous predators. This does not mean that we want them to cease to exist. We co-exist with them.

Our panthers are endangered. As a matter of fact, they are considered to be one of the most endangered mammals in the whole world. We are graced with their beauty and presence in Golden Gate Estates. By allowing the Dan A. Hughes Company to drill in this area, we are signing the death warrants for many of our panthers.

Eventually, they will come to the point of extinction. That may be acceptable to the drilling company and government agencies, but it is not acceptable to most of the Golden Gate Estates residents. We understand that there are natural predators here; yet, we choose to live here among them.

The drilling site is potentially right on the border of the preserve. An accident could take out a significant number of panthers, as well as other important indigenous forms of wildlife. It is absurd for our government agencies to even be considering this. Why declare Florida panthers endangered if the drilling companies can potentially reduce the population with the government’s okay? It doesn’t make sense, so it means the almighty dollar is more important than our endangered wildlife.

The Everglades has been damaged enough throughout the years. Non-indigenous trees and plants choke out the native species. The Brazilian Pepper trees that seem to be everywhere are nothing more than kindling during brushfire season. Hasn’t the ecosystem been damaged enough? There is no other place on the planet even closely similar to our precious Everglades

The government regulates the number of trees we must have on our properties in Golden Gate Estates, but the Florida Department of Environmental Protection Agency might let them drill here. This doesn’t make sense. Would they allow drilling in Grey Oaks or any other gated community? You know they never would. Seepage could ruin the golf courses but it might be alright in the Everglades.

If the Florida EPA allows this drilling, the way of life we enjoy in Golden Gate Estates will cease to exist. Stand up people! Do something. Write your Senators, Congressmen, the Governor or the President himself. Just do something to help stop the permits for drilling near our homes. It’s up to all of us to protect the Everglades. For your land, for your lives, for your families, for your Florida, stand up and stand tall and stand together to protect and preserve our piece of paradise, Golden Gate Estates.

How to Get Involved

There are several ways to help the citizens of Golden Gate and all of Collier County if you are concerned about the possibility of oil drilling in your backyard.

First search Preserve our Paradise and find our Facebook page. You don’t have to have a Facebook account to view it. There, you can learn more information and sign petitions to the Department of Environmental Protection, Rick Scott and Florida legislature.

On Saturday, August 31, from 7 to 9 PM, we will hold a March to Governor Rick Scott’s Naples home to tell him to stop the oil drilling. We’ll rally at the Naples Fishing Pier, 25 12th Ave. S. Naples. Then we’ll march one and a half miles on the beach to the Governor’s Port Royal home, 3150 Gordon Drive, with signs spelling out our concerns. By sea, a flotilla of boats and rafts will travel parallel to us, with banners and flags displaying images of the natural resources we hope to preserve. At the Governor’s house we will build an oil rig in his backyard to make visible why Collier residents don’t want backyard oil drilling. The DEP answers to Governor Scott. We’re urging the Governor to tell the DEP to deny the permit based on unreasonable danger to residents, water, wildlife, and wetlands. Please join us. Contact: dwyerka@gmail.com

If you’re up to it, write letters of concern to the following people who may have influence on the outcome.