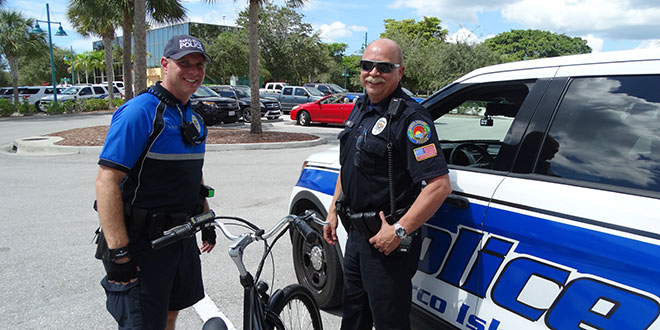 Law enforcement officers, like their counterparts in the fire rescue services, are often called upon to render lifesaving aid to many within the community on a regular basis. When they are called upon to respond to a citizen in need of assistance, they do so without missing a beat.

However, for two local Marco Island officers it became personal over the weekend when Officers George Guyer and Paul Keys were sharing some lunch on Saturday and Keys began to choke on his food. “I couldn’t breathe, I knew something was blocking my airway and I couldn’t take air in or out,” said Keys.

“Paul started coughing in an attempt to clear his throat and I asked him if he was ok,” said Guyer. “He shook his head no, so I immediately got him to stand and at first administered a couple of sharp blows to his back. When that didn’t work I administered the Heimlich maneuver which dislodged the blockage,” said Guyer.

Choking is the fourth largest cause of unintentional injury death in the United States, according to the National Safety Council. Well over half of those deaths occurred in adults over 75.

The upcoming holiday season is one which both Keys and Guyer expressed concern about, hoping residents would be paying more attention to their surroundings and be prepared to administer this relatively simple maneuver to help save a life.

“Children are very susceptible to putting small toys or items in their mouths and causing an airway restriction and possible death,” said Keys who once was a paramedic. “Everyone should become aware of how to employ the necessary first-aid procedures to free that obstruction should it occur,” in both adults and infants, said Guyer.

The American Red Cross recommends a 5 and 5 Approach to help dislodge a blockage:

Give 5 back blows. First, have the subject bend over and deliver five back blows between the person’s shoulder blades with the heel of your hand.

Use This Procedure to Administer the Abdominal Thrusts:

The process is different when dealing with an infant, and you should contact the Marco Island Fire Rescue Department for those necessary instructions at 239-389-5040.