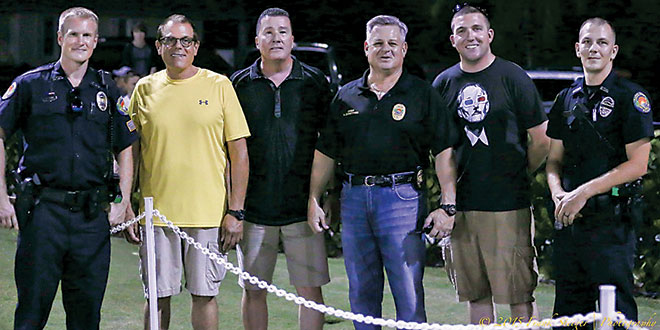 But even if you don’t have children who go to school on Marco Island, chances are if you live on the island you either know or recognize the 34-year-old.

Since he started as the school resource officer last August, Mark has become a familiar and trusted face for the students and their parents. He says that the best part of his job is “being around the kids. They make work fun.”

This year he is fighting his own battle.

Recently Mark was diagnosed with mucoepidermoid carcinoma, a rare form of mouth cancer.

When Mark was diagnosed at the end of June, doctors told him that chemotherapy and radiation were not options, and that he required surgery.

He has already undergone two surgeries, and a third 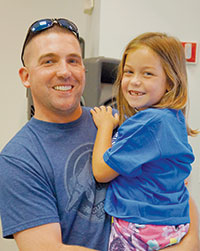 is scheduled for late October at the Moffitt Cancer Center in Tampa. The procedure involves removing the cancer and reconstructive surgery to rebuild his nasal cavity and palate.

After the operation, Mark will spend up to two weeks in the hospital, followed by one to two months of recovery and rehabilitation.

The police department has already pulled together for Mark. Marco Island Police Chief Al Schettino confirmed that a total of 467 personal leave hours have been donated to Mark by fellow officers. And while Mark is recuperating, two auxiliary officers, Sal Pernice and Rod Rodriguez, will assist with Mark’s duties at the schools.

Chief Schettino says, “We have a wonderful group of men and women who are always willing to come together to assist not only an officer, but anyone in need.”

Fellow officers have only praise for Mark, as an officer, a friend and a father.

Officer Josh Ferris says, “Mark started only a few months after I did in 2012. Mark has always been a great friend and trustworthy person. Mark quickly became committed to the department and took on roles to 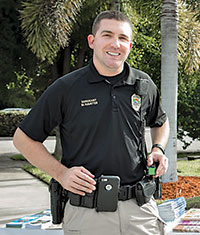 Josh adds, “Most of all, the love Mark has for his daughter has always shown through, and that is what I respect about him the most!”

Undoubtedly the most important person in Mark’s life is his 7-year-old daughter, Kyleigh Faith. Mark shares parenting equally, alternating weeks with Kyleigh’s mom. Kyleigh will stay with her mother while Mark is in Tampa.

Community support has been swift. A GoFundMe campaign to help with out-of-pocket expenses and costs not covered by insurance has already raised $15,261, and the campaign has been shared over 1,500 times.

Officers are also holding a fundraiser for Mark at the Sunset Grill on October 8 from 3-8 PM.

If you would like to help, go to the “Mark Haueter Cancer Battle” at www.GoFundMe.com. Donations by check may be made out to the Marco Police Foundation and mailed to 1083 North Collier Blvd., #123 Marco Island, FL 34145. Please indicate on the check it is for the Mark Haueter Cancer Fund.