OFF TO PUERTO RICO 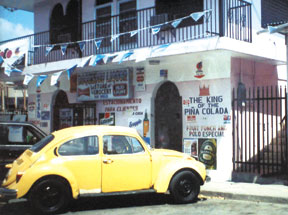 After spending a long time in the Dominican Republic, it was time to move on to our next port of call: Boqueron, Puerto Rico, which is on the west coast. Ah, Puerto Rico at last! As always, you had to clear in and out of each country or island nation that you visit. Always check ahead of time just what the requirements are for each country or island nation as they are not all the same.

As we entered the harbor we were so pleased to see many of the other boats that we sailed with along the way. It is a great experience to be greeted by fellow cruisers in the many different ports where we drop anchor. Inevitably, all cruisers have a story to tell about their recent passage. Also those cruisers, who have arrived before you, always have advice about what to do, how to do it, and where to go.

Boqueron is a charming seaside resort for the local people. To me it was very reminiscent of beachside resorts of the fifties. The buildings were all gaily painted in bright colors such as yellow, turquoise, blues, greens and hot pink. Merengue music blared from the shops all day into the night. I must add that each place plays a different tune at the same time making a cacophony of sounds. We loved it!

While walking along the streets of Boquerón, we walked past a clinic. My husband looked in the window and decided to have a closer look inside. As coincidence would have it, my husband met a town doctor who just happened to be using some of the medical equipment that my husband designed and developed. Needless to say, they had a long chat.

For us the weekdays were rather quiet; but on weekends the whole island really hops. 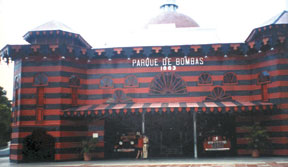 The streets are lined with vendors selling all kinds of foods including raw oysters, corn on the cob, pinchos, which is grilled meat on a stick, BBQ chicken, tostones and on and on. It was like one big spring break celebration. We and other “yachtie friends” would go to town at night and especially the week-ends.

Pool or billiards was also big there and we would play with our friends. After a hot game of billiards, we would look forward to a “cerveza fria” which is a cold Medalla beer. That was really needed after the game. One other first hand observation is, if possible, do not go to the shopping centers on the week-ends. They will be very crowded. Every family, mother, father, children, grandparents are all out together doing their shopping.

We hated to leave the comforts of Boquerón, but we had to move on. It is so easy to become comfortable and attached to the towns that you enjoy and resist going on with your travels. But alas, if we wanted to see it all, we must budget our time. We were beating eastward into the wind and would be doing so for much of the trip along the PR and south coast. We had a short stay and R&R in La Paqura which was our first stop on the south coast.

We sailed along the Southern coast to Salinas, which is a very protected anchorage. It has many facilities. The Marina de Salinas was the best marina at that time. Ah, creature comforts at last! There was a pool, snack bar, laundry, phone booths, and other boater facilities. Remember this was over ten years ago and public phones were a rarity then, especially in island nations. 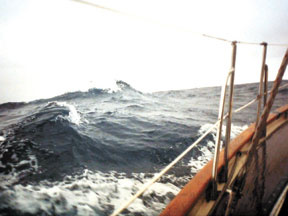 a pot luck hosted by the cruisers on the marina grounds. At last we could stop moving around for a while and spend some relaxing time alone on our boat or with friends. We had several choices of things to do and places to see.

We rented a car to drive around and see all the sights that you cannot get to without land transportation. We toured Ponce, Adjunta, Old San Juan, Palmas del Mar and Fajardo. Ponce, which is on the south coast, a lovely city with beautiful architecture and malls that rival anything in the States.

In July, we bid farewell to our boating friends in Salinas and sailed to Farjardo. The winds were up so we sailed instead to Puerto Pattilla and spent two nights waiting for the winds to die down. We needed to continue eastward to Fajardo and get GRENDEL ready to be hauled and stored for hurricane season which was fast upon us.

Two nights later at 10:30PM we left our anchorage and sailed all night to Farjardo, which is located in Puerto Rico south of San Juan. We arrived at Puerto del Ray Marina at dawn, which was too early and had to wait for the dock master to arrive and assign us a slip.

Whew! What a relief to be still and anchored up. The long hours at sea, especially at night, are enjoyable but tiring. When we got there, we tied up to a dock, cleaned up the boat and took a quick nap as we waited for the dock master to come and check us in. We then prepared GRENDEL to be hauled as we made arrangements to fly home for the hurricane season.