October fishing in the 10,000 Islands 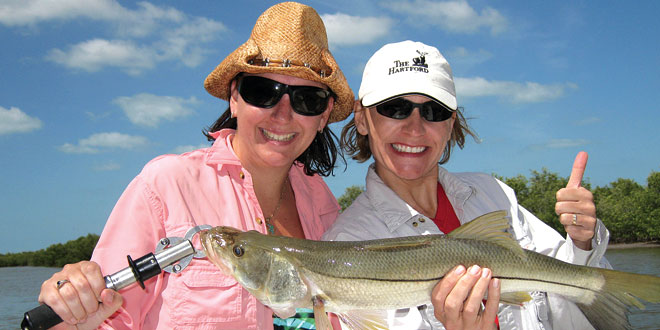 It may not feel like it just yet, but our first fall month is upon us, and the daily rains will start to diminish throughout the month. It will still be hot out there, but it sure will be nice to see the change of seasons. October is here and what a great month it is to fish the 10,000 Islands! Our day time air temperatures are now averaging around 87 degrees, as water temps hover around 81 degrees.

Typically we will begin to see some nice schools of large live bait like Pilchards and Thread Herring pour into the area. Get your cast net out and scout for them close to the shorelines at higher tides. In lower tides, have a look out a little deeper. Look for birds working schools and you will be rewarded with the best bait around.

Primary targets change each season, and I especially 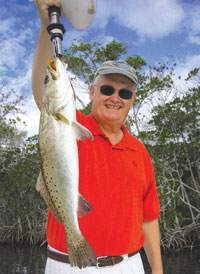 Lee with a nice Trout. PHOTOS BY CAPT PETE RAPPS

love to hunt for Reds in October! We have been seeing an exceptionally nice number of Reds all summer long. Now with the change of seasons, cooler water temperatures, and the influx of live bait, It should prove to be a stellar month for slot size, and larger Redfish. It’s hard to beat the sight of schooling Reds tailing as they work over a submerged oyster bar! Throw them a live shrimp under a popping cork for almost instant hookups. If you have some live whitebait like Pilchards or Threads in the livewell, get them out there too! We have caught more 30”+ Reds on live 4” whitebait than anything else! As far as artificials go, I love Cotee’s 3/8 oz Liv’Eye jig heads in Red along with a Glitter Shad Body. Tie them up to 3’ of 20-30lb fluorocarbon leader tied to 10-15 lb braided line on your spool.

Jill holding a nice 30 inch back water red for a quick photo before releasing it.

on the move and will be fattening up on the outside bars and cuts. They are on the move into the back waters and will gladly accept some of those live baits. Tie up 3-4’ of 40lb fluorocarbon leader to 30lb braided line, and pitch those whitebaits into the deeper eddies against the mangrove shores.

Spotted Sea Trout are also around in good numbers. Hit the outside grassy flats in 3’-5’ of water on an incoming tide. Work a popping cork with a weighted live shrimp for lots of action. Also get out your artificial arsenal and work them on the same flats. We like to use 3/8oz lead jig heads with a soft plastic bait like a DOA C.A.L. 4” jerk bait. DOA has a new bait called the “AIRHEAD”. We have been using both white and root beer colored baits with fantastic success.

Need some lessons? Book a charter and we’ll show you how it’s done!