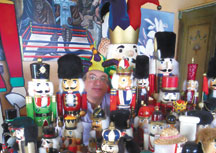 I certainly never thought about seeing them in a restaurant. Actually, my main memory of nutcrackers as a kid, is the kind my parents used to have to actually crack nuts with. They always served nuts with the shells on and it was such a pain to use that hard to hold instrument to crack one. Why couldn’t they just serve already shelled nuts, I used to think. My other memory is dancing in the Nutcracker Ballet as a teenager. Maybe by then, I was catching on to the magic of nutcrackers.

Getting back to the idea of putting nutcrackers in a restaurant, they appear every year in the Little Bar Restaurant right here in Goodland. Like magic.

I sat down with owner Ray Bozicnik to 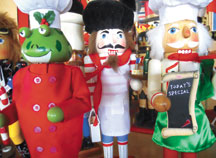 hear about his amazing collection. Along with his co-owner sister Niki, he has hundreds of nutcrackers all spruced up and displayed throughout their restaurant for the holidays. Ready for the holiday magic show.

Nutcrackers in human form became popular years ago and they are enjoyed for their whimsical expressions, costumes and legends of the past. Some say they bring good luck, some say they bring power and strength and some just like to collect them as fascinating conversation items.

The Nutcracker Ballet brought nutcrackers to the American forefront in the 1950’s. In the story, Clara is given a nutcracker for Christmas and it accidentally breaks. She falls asleep with it in her arms and dreams about a winter wonderland, sugar plum fairies, candy canes and a handsome prince.

I asked Ray how this collection began. Ray explained as only he could, “Twenty-five years ago one of my servers suggested we decorate with a nutcracker for the holidays.”

of all different sizes and designs. Now it is to the point that clientele bring them nutcrackers every now and then.

Ray gives each employee an ornament for the holidays. Then he says, “The fun begins. Each one has a turn at breaking the ornament by opening and shutting a life size nutcracker’s mouth. Snap, crunch – and like magic there is money inside!”

Isn’t that a creative way to show appreciation to your employees?

So when you dine at the Little Bar this holiday season, and all the while gaze at the hundreds of nutcrackers, pick out your favorite and dream of your own holiday fantasy with sugar plums, candy canes, snowflakes and wishes that come true. Like magic.

I doubt if Ray will let you try your hand at crunching an ornament, but you could always bring him another nutcracker just for fun.

Joanie Fuller is the President of the Goodland Civic Association. She and her husband of 47 years, David Fuller, are residents of Goodland