November’s Birthstone: A Cornucopia of Color 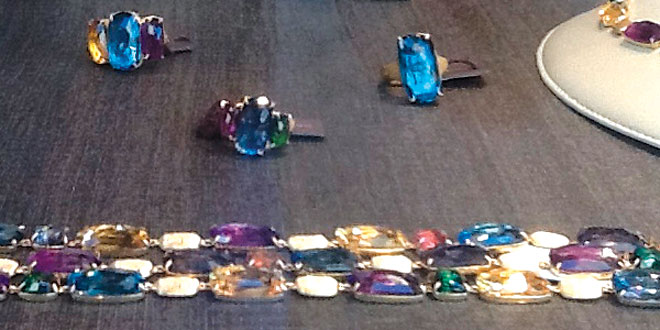 You will not be invisible with vibrant colored topaz. PHOTO BY RICHARD ALAN

November is a great month for birthstones. It’s a virtual “pick a color – any color!” Topaz is an old Greek name for Topazios, an island located in the Red Sea. Which, in fact, was actually an ancient source for peridot – the ancients confused it with topaz. Today, citrine is almost always confused with topaz where the colors are nearly identical.

Through the miracles of both Mother Nature and modern science the choice of color available in topaz is mind boggling. Grandma’s or Aunt Edith’s huge topaz ring was probably a smoky topaz which once again, is not topaz at all but inexpensive smoky quartz. Confused yet? It can be even for a professional gemologist.

To me, the most beautiful of all topazes is precious topaz, it is bright and lively and the color of a fine Madeira wine or burnt orange. It was also called Imperial topaz when it became popular with Russian Czars and their queens, along with others of European royalty.

The most popular color seen in most jewelry stores this past decade is blue topaz, available in sky, Swiss, and London blue.

At this moment in time, due to radioactive science, almost any color can be achieved. Yes, I said radioactive. Bombarding clear natural topaz with gamma rays, also called gemstone irradiation, and adding other minerals to the mix can create an unlimited color palate. And yes, all finished radioactive (irradiated) treated gemstones are tested for unsafe levels before they are allowed to be sold to the public. There are documented instances of gems tested with dangerous levels of radioactivity created in unsafe laboratories in certain countries that used the wrong kind of reactors. I can assure you that the colored topazes purchased in my shop are safe and won’t cause your hair to fall out.

The plus side to topaz is that the colored topaz is affordable in large sizes unlike the top three precious gemstones: ruby, emerald and sapphire.

There is no lack of superstitions about the gem…In the Middle Ages wearing a Talisman (pendant) of topaz would supposedly protect the wearer from physical and mental disorders and even prevent death from diseases such as the black plague.

The Greeks and Romans revered the gem in battle believing it to enhance strength, make them invisible and improve their eyesight. The ancient Egyptians wore topaz to prevent injury in battle.

There is no doubt that the ancients wore topaz for protection from both the known and unknown. Did it work? Wear some topaz and find out for yourself.

On my recent visit and jewelry quest to Europe, topaz was a predominant gem in the latest designs from Paris to Florence; I like to call the multi-colored pieces “jelly bean” warm pastel colors that compliment corresponding chic Euro-fashion. Many of the high fashion silver jewelry lines I found throughout Europe are using colored topaz as the main focus.

It is not just for use as a birthstone, the vibrant pinks and electric blues look outstanding in both gold and silver. Wearing these colors will certainly not make you invisible.

What exactly is German silver?    – W.D. from Marco Island

German silver is not silver at all. Although it looks and feels like silver, it is a combination of 60 percent copper, 20 percent nickel and 20 percent zinc. Widely used in the late 1800’s for numerous things because it did not rust like iron or steel, it was used in tack harnesses for horse and carriage, belt buckles, costume jewelry and even used on the first Rolls Royce as the metal for handles, knobs and adornment throughout the automobile. One is able to put an incredible shine on the metal, but it requires constant attention to keep it that way, due to the copper content. Sorry, but any small quantity of the metal (jewelry) is basically worthless.