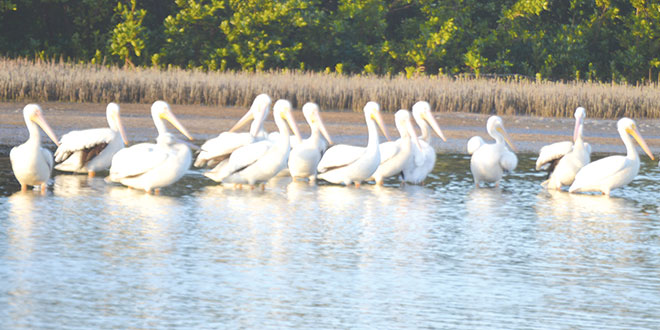 On Nov. 16, my daughter sent me a picture from Oshawa, Canada, just east of Toronto, to show me snow on the ground. I already knew that it had snowed in the Rockies a few weeks earlier. On the morning of Nov. 18, the local weatherman stated that 83 percent of the continental United States was at, or below, freezing! What’s up, Mother Nature? In mid-November?

I’m aware of some of the annual migrations of birds from the North to the South, and they usually leave their northern habitats before Old Man Winter makes his presence known. Guess what? They did it again! How did they know? Even with severe conditions this early in the winter season, some of them were already here. Let’s meet a few.

White Pelicans: Last year, I was not aware of any white pelican sightings this far south until December. This year, there were several sightings in the 10,000 Islands in very early November. In fact, I saw a lone white pelican in the first week of the month beside a canal on Collier Boulevard near Rattlesnake Hammock Road This was quite unusual, but it looked and acted healthy.

White pelicans migrate to South Florida from the U.S. Northwest and from Canada. Studies indicate that their migration habits are based on the freezing and melting of the northern fresh water lakes. They are huge, sporting a wingspan that can reach nine feet wide and are second in span only to the California Condor.

The white pelicans do not use the diving techniques of our local brown pelicans to catch their fish. Instead, they work in groups. In their coordinated fishing strategy they will swim in a semi-circle and flap their wings on the water’s surface to herd a school of fish toward a shoreline and then catch them. Sometimes, they will also herd fish toward other waiting pelicans.

These winter visitors will usually stay here until March, when they return home to mate and raise their young. It is estimated that 1,500 white pelicans will make this annual journey to South Florida. Keep an eye on the sky!

Peregrine Falcon: In early October, I got to see the fastest animal on the planet by the Jolley Bridge. The Peregrine Falcon of the northeast part of our continent stops here on its way to the Florida Keys and eventually to Central and South America. Last year, there were constant sightings of one of these raptors in our area for several months, usually beginning in December. 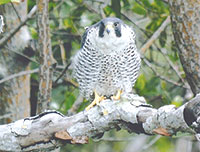 heading to the Florida Keys. They use that location as a launching pad to continue as far south as Nicaragua.

This falcon is one of the few raptors that will capture its prey while it is still in flight. The Peregrine will soar as high as 10,000 feet and then locate a smaller bird below with its keen eyesight. It will fold its wings in and dive at the prey at speeds exceeding 200 miles per hour. It is equipped with specially designed nostrils that allow it to breathe at these speeds and a film develops over the eye as well, so it can still see the prey while descending. The catch is made by striking the smaller bird in flight, and it is done with such force that the prey usually is killed on contact. It is, indeed, the fastest animal on the planet.

I’ve checked my research and maybe it is not uncommon to see Peregrine Falcons here at this time of the year. In 2012, a bird count in the Florida Keys revealed that more than 650 of these falcons were there on October 10, ready to continue the migration further south.

So, what about the falcon(s) I saw last winter in the Marco area in January and February? Was it tired, disoriented, ill, lazy or just late to the party? Was it just one bird that I noticed or were there several different Peregrines in our area for a few months? Did I miss the arrival of white pelicans last October, not seeing them until December, or are they early this year? Certainly, things appear a bit different from time to time.

So tell me, Mother Nature, give me a hint about what’s going on. Are there subtle changes taking place regarding some bird migrations? Did I miss the memo? Are places like Buffalo, NY, really getting a full season worth of snow in one week — in Novemberrrr?

Here’s one of my favorite phrases: “If there’s one thing that’s constant in life, things change.” There have definitely been changes in recent years. As humans, we rely on logic to figure things out while animals still rely on instinct. I’m thinking (uh-oh, logic) that I should become more animalistic, but I don’t know if my instincts would be sharp enough to react properly.

In any case, it is always a joy to have such feathered friends join us for a while.

Bob is the owner of Stepping Stone Ecotours and a naturalist on board The Dolphin Explorer. Here is a proud member of Leadership Marco 2014 and Bob loves his wife