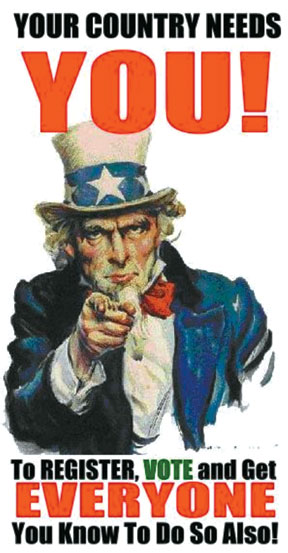 Time has come to address the concerns and interests of all Americans.

Humorist and author Dr. Jim Boren once said, “Taxation with representation ain’t so hot either.” Your behavior has done much to support this assessment, but your reign of indecisiveness, disagreement and gridlock is about to end. On November 6, the American people will either vote to retain our present administration or replace it with new leadership. Regardless of the electorate’s decision, you will have to come to grips with the inevitable conclusion that you must succumb to compromise. In case you are not familiar with the term, it is defined as: “a settlement of a dispute between two or more sides, which agree to accept less than they originally wanted.” If you manage to succeed in the art of compromise, you may discover that you expand your credentials to include the singular title of ‘statesman.’

For those of your number who are unfamiliar with this term, it is defined as: “a ‘man’ who is widely respected for integrity and impartial concern for the public good.” What a noble concept. Perhaps if you decide to emulate the selflessness of our forefathers and follow in their footsteps, which enabled our country to become the greatest nation that ever existed on our planet, you will dramatically raise your current, miserable 7% approval rating. You may restore the respect, trust, and admiration of the constituents who elected you and a nation which has depended on your once honorable institution for governance.

To clear up any misconception about the purpose of this article, I will tell you, first and foremost, I am neither a Democrat nor Republican. I am an American. My political affiliation is Independent. Therefore my views are not directed toward any one party, but rather to an inept, wavering Congress that has lost sight of its purpose and whom it is they truly represent. This Congress has failed to heed the wisdom of former President Rutherford B. Hayes, who believed that “one serves ‘his’ party best by serving ‘his’ country best.” For too long, Congress has deluded itself and the American people that gridlock is the instrument of choice to maintain a steady course. This may have appeared to work during prosperous times, but in reality, failed to address the underlying problems that smoldered under a smokescreen of nominal success.

In a few days the election process will choose who will join or rejoin the legislative branch entrusted to enact the laws that govern our nation. You must understand when you take the oath of office, that you assume an awesome duty to all Americans, not just the members of your respective parties. The selections made on November 6 will prove inconsequential if, once again, you fail to compromise and address the urgent issues at hand. The time has come for all members of both chambers of this once honorable institution to become more centralist.

I realize some of you believe that the Senate or House in which you presently or will soon reside, will never reach agreement on critical areas such as Social Security, Medicare, immigration, and tax reforms. However, you have no choice but to do so even though you may have to make concessions and consent to majority rule. We, as a nation, have serious concerns that need to be addressed and numerous programs that are in dire need of restructuring; modifications that must be fair, rational, and constructive. No problem is insurmountable if you are open to suggestion and compromise. Although your resolutions may differ, there is common ground: the well-being of our country and the public you were elected to serve. And, if there are members of the Senate who choose to consistently invoke the filibuster to prevent legislation from being enacted that represents the will of the majority, then their constituents should give serious consideration to immediately recalling these recalcitrant obstructionists from the upper chamber.

What I fail to understand is how some of you have justified your willingness to compromise your integrity and oath of office by catering to special interests, yet have been unwilling to compromise to serve the best interests of the country you were elected to serve.

I believe our government should champion fiscal restraint, for you must collectively ensure that our nation remains secure and unchallenged, that our economy once again becomes robust, and that our nation’s sovereignty is never in question. I also believe you should display empathy toward our fellow man, for you have a moral obligation to help the sick, poor, and elderly Americans who are truly incapable of helping themselves.

If you continue to lack the sense and tenacity to solve our country’s problems and wish to delegate the responsibility to others, instead of appointing fact-finding committees, perhaps you should appoint a bi-partisan fact-facing committee to address the issues. Unlike the Simpson-Bowles Commission, gather a board of voters who have never held public office, have no political aspirations, have a balanced economic agenda, are not obligated to a specific party or special interest group, and are proportionately representative of the general population. Let them brainstorm for a day or two. I’m sure they’ll provide an ample supply of innovative ideas for you to consider. Perhaps you ought to visit our libraries, gyms and grocery stores, and our malls, barber shops, and town halls, not to campaign, but to listen. Your constituents most likely have more common sense than many of your peers, and far more valuable and practical advice to offer than you will hear from your colleagues in future committee discussions.

Unfortunately, most of my friends and acquaintances are correct when they say no one wants to listen. There once was a time when the average American could speak candidly to his or her representative and provide sound ideas that were actually considered. It seems in today’s world unless one is a corporate CEO, a lobbyist, celebrated athlete, fellow politician, actor, media star, or billionaire, our representatives believe we have little to contribute to the intellectual hierarchy that occupies the great hall in which you will soon legislate. Sadly, many of you are detached from your constituents, and when you do address the voter, you often seek admiration and approval rather than honest assessment, often admonishing those who wish to express an alternative view. This disdainful attitude is spreading through our society, for we have become a polarized nation where neither side wishes to consider the other’s conflicting views.

You have grave concerns that need to be addressed including the immediate removal of government personnel from host countries which fail to protect diplomats from insurgent and terrorist activity, and the immediate withdrawal of military personnel from combative arenas that expose troops to intentional friendly fire. As to the numerous programs in dire need of structural reform, I urge you as an American voter to work on our behalf to make program modifications which are fair, rational, and constructive. Although your revisions will have to be substantial, most reforms should be graduated in order to safeguard program recipients and bring about effective change which will not shock our fragile economy.

The future of our great nation will be decided by the actions of our newly elected 113th Congress. However, after November 6, you will have little time to bathe in victory. Time is not running out, it has run out. Yes, we face an impending fiscal cliff. But, that is addressable and miniscule when compared to the pending economic calamity that our nation faces if you fail to recognize, confront, and address the numerous problems that have been ignored by your predecessors including our massive annual deficits and spiraling debt. If you, our American Congress, fail to implement structural changes that will eliminate deficits and reduce our massive debt, America will soon become a fragment of its former greatness, another footnote to a history of former great civilizations which succumbed to indecisiveness, disagreement, gridlock, and discontent, preceded by greed, arrogance, complacency, and inattentiveness.

Former President Bill Clinton said. “There is nothing wrong with America that can’t be fixed with what’s right with America.” Former President George Bush said, “We are not limited by what we have done, or what we have left undone. We are limited by what we are willing to do.” I ask you to think of all that is right in America, and reconsider what you are willing to do to fix what is wrong.

Your actions will determine if our nation becomes a mere historical annotation in the centuries to come, or a nation that continues to inspire and aspire. I pray it is the latter.