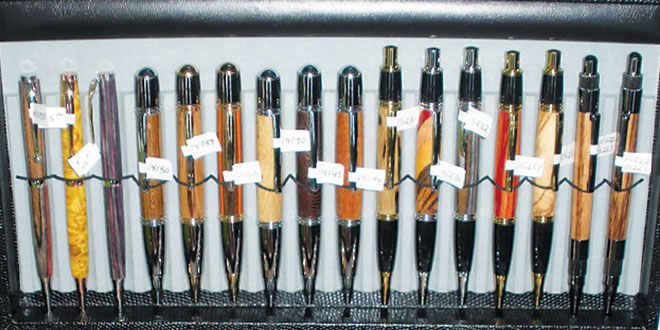 A pen isn’t just a pen if it’s a pen that sprang from the fertile mind and skilled hands of Doug Johnson.

The same applies to the pepper mills and bottle stoppers that the Marco Island resident produces in a small work area he has created in his garage.

Johnson is a practitioner of the avocation and in some cases, vocation, of “turning,” the art of forming objects on a lathe, or an object, such as a spindle, that is turned on a lathe.

Since taking up the pursuit about one year ago, the retired pharmacist has become skilled in crafting distinctive, attractive and functional pieces from wood. In fact, his handiwork can be purchased on a consignment basis at several locations on the island, including the Marco Island Historical Museum, Mango’s Dockside Bistro, the Marco Island Center for the Arts and Marco Office Supply. 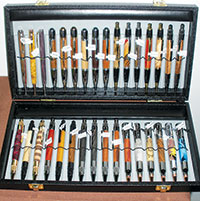 in wood, seeing the grain of the wood,” said Johnson. “You just see that grain come out and it kind of says something to you, so you keep carving until you see what it’s going to be.”

Johnson’s father was a carpenter, but didn’t pass along his knowledge to his son, who instead, learned woodworking through osmosis and self-study.

“I just always had to do something with my hands,” he said. “I was really involved in stained glass work for about 30 years, for my own use and to give away as gifts, and then I started doing commission work for other people.”

After Johnson and his wife Marie moved to Marco in 2003 from Michigan, he found himself looking for a new hand-crafting medium to explore.

“I always enjoyed working in wood, but I don’t have a large workshop,” he said. “I just started poking around, on-line, to find something that piqued my interest.”

Inspiration came from a magazine article 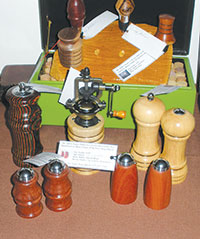 Johnson happened across that profiled a pen turner in Southwest Florida. That discovery led him to research the craft, including watching YouTube videos for background information. After sufficient study, Johnson dove in and purchased a small, highly precise lathe about one year ago. He then began the trial and error process of learning how to make pens, bottle stoppers and pepper mills.

Johnson doesn’t always have a design in mind when he selects a chunk of wood and prepares to start carving, although he’s limited in how intricately pens, whether ballpoint or fountain, can be designed because of their specific dimensions and the required center hole in the wood. 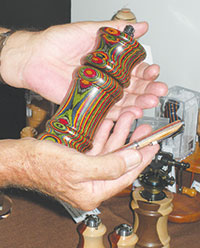 Doug Johnson displays some of his creations. PHOTOS BY DON MANLEY

just turned and then match it 100 percent.”

More than 100 types of wood are used for Johnson’s creations. He prefers varieties that in his estimation, offer the best grain patterns. His favorites are exotic hardwoods such as Cocobolo, Olivewood, Black and White Ebony, Zebrawood, Osage Orange, Orange Agate and Burmese Rosewood.

“You want woods that will show the grain pattern well when it’s a small format object, like a pen,” said Johnson, who uses no stains, preferring instead, the wood’s highly polished natural grain. “To me, that’s where the fun is, is in creating a one of a kind item.”

He purchases wood from the limited number of U.S. exotic hardwood dealers, as well as on Ebay. Rather than coming in sheets like plywood, these woods may come in 20 lb. shipments containing 6-inch by 6-inch blocks that he cuts down to the size he desires. 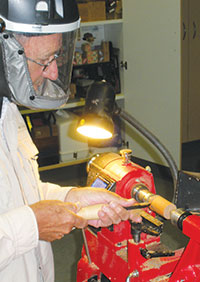 The process of “turning” a piece of wood to create a pen body begins.

until you cut the wood and see the grain and then you decide this would make a nice pen, bottle stopper or pepper mill,” said Johnson.

Once a piece of wood is selected and placed it on the lathe, it takes two to three hours for Johnson to produce any of the varieties of pens he makes. The same time frame applies for bottle stopper, but the more intricate process of making pepper mills requires three to five hours of work.

Johnson said pen turning isn’t “a huge hobby” but there are several websites devoted to the craft, as well as hardware, such as ink cartridges, it requires. Some pen turners even make a living at the craft, selling their wares at arts and crafts fairs.

“I’d say it’s more on the hobby side than anything else,” he added. “It’s very difficult when you spend the amount of time you do for each item. You’re not going to make much money and you can’t charge for your time.”