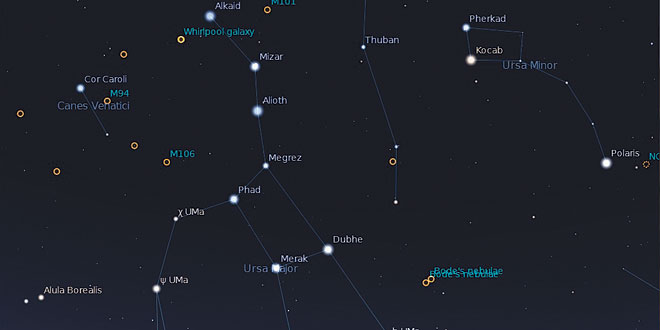 Facing Northwest, 11:00PM July 19. Did you know that Thuban was the North Star when the Great Pyramids were built? SUBMITTED PHOTO

Generally we look towards the south in this column, but tonight we will gaze northwestward. Here far from the Milky Way there are fewer stars and no star clusters of note. However, there are no dense clouds of dust to hide the wide spaces outside of our galaxy and a number of other galaxies are visible in binoculars. Each little circle on the chart marks the location of one. They are all rather faint and will not be seen with the Moon in the sky.

For the naked eye observer there is the famous Big Dipper, actually part of the much larger constellation of Ursa Major. Typically if a person knows just one asterism – it will be the Big Dipper. Five of the stars share a common motion through the galaxy and belong to what might be considered a very loose cluster in the process of coming apart.

The pointers on the bowl end of the Dipper are a common way of locating Polaris for beginning stargazers. However, Marco is so far south the Big Dipper is hidden below the horizon for several months a year leaving beginners at a loss.

The smaller companion to the Big Dipper is the nearby Little Dipper with Polaris at the handle’s end. The Little Dipper, more properly known as Ursa Minor, is interesting because while nearly as famous as the Big Dipper relatively few people have actually seen it. The problem is that the Little Dipper is such a faint constellation. Tonight with the Moon shining brightly two stars are likely all that can be seen. Even without the Moon, three stars are about the maximum that can ever be seen in suburban Marco. (The two stars besides Polaris that can be seen are nicknamed “the guardians”.) The Little Dipper is a good barometer of a light polluted sky; the more stars you can see the darker the sky. Since people can not make out the constellation it is not unusual for someone to point out the Pleiades, which do look a little like a dipper, but are nowhere near the location of the true Little Dipper.