It has been more than a year since our consulate in Benghazi was attacked by Al-Qaeda associated terrorists (Ansar-Al Sharia/Partisans of Sharia Law) and our Ambassador was assassinated along with two former Navy Seals and a State Department employee. To date, no one has been arrested and all 15 Libyans who cooperated with the investigation and knew full details of the planned attack have been killed.

Last week, a disgraceful report was published by a Congressional Committee composed of Democrats and Republicans which looked like a high-school student’s term paper trying to please the teacher while skirting around the real issues. This proved my long-time belief that the elected officials in Washington are all members of the same team wearing different uniforms. I am no longer disappointed; I am filled with righteous indignation!

When our Government sent my daughter and son-in-law wearing United States Marine Corps uniforms into combat in Iraq back in 2003, they went there because they believed they were protecting us. The American people and I had a reasonable expectation that our government would protect them regardless of costs, ideology or personal agendas of the politicians of the day.

I no longer have the same reasonable expectation. I believe the people in Washington who send our sons and daughters to fight wars in foreign countries will abandon them when the heat is turned on — just to save their own butts. The top official in the State Department is the Secretary of State, who is responsible for protecting the lives of our embassy and consulate officials in foreign lands. The Secretary reports to his or her boss, and that happens to be the President.

The buck should have stopped there; however, in this case it did not! Four great Americans were killed in the service of their country, and all Secretary of State Hillary Clinton could utter (waving her arms in Hollywood-esque disgust and staged indignation) was “the fact is we had four dead Americans. Was it because of a protest or was it because of guys out for a walk one night who decided that they’d go kill some Americans? What difference at this point does it make?”

Let me tell you something Madam Secretary: It makes a hell a lot of difference to me as a citizen that four of my countrymen were killed by terrorist while serving our country under your orders and your full responsibility, and you did absolutely nothing to protect them except to try and cover up your mistakes in the aftermath 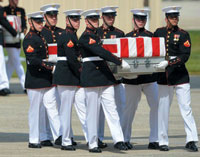 because you were concerned about an impending election! That was probably the most selfish and unacceptable act by any American politician of any political persuasion in the history of this country. As long as I have anything to do with it, I promise it will never happen on YOUR watch again!

What happened in Benghazi is very clear to me, and I hope it is very clear to the rest of my fellow Americans. Let us go through the events one more time in case some have forgotten or some have taken Secretary Clinton at her word that it does not make a difference!

On March 28, 2012, Ambassador Cretz sent a cable to Secretary of State Clinton requesting additional security assets. On April 6, 2012, terrorists threw an IED over the consulate wall in Benghazi. Six days later, a cable was sent from the State Department to Cretz signed by Secretary Clinton refusing the request for security, instead suggesting a pared-down plan. In May 2012, terrorists attacked Red Cross and warned the Americans about an impending attack. On May 6, 2012, terrorists blew a large hole through the consulate gate. During the month of May 2012, the British Ambassador in Benghazi survived an assassination attempt, and Al Qaeda forces rallied in the streets. Ambassador Chris Stevens warned the State Department that extremist groups were openly operating in the streets of Benghazi and other places in Libya.

In July 2012, a State Department official “demanded” that no further requests for additional security be made from the Embassy in Libya! Later on, Ambassador Stevens requested at least 13 more security personnel citing the “unpredictable” situation in Libya. Regional Security Official Nordstrom warned the State Department that risk to U.S. officials in Libya was “HIGH.”

On Sept. 6, 2012, President Obama closed his speech to the DNC with, “Al-Qaeda is on the path to defeat, and Osama bin Laden is dead!” On Sept.

On the morning of Sept. 11, 2012, Ambassador Stevens sent a cable to the State Department warning of deteriorating security situation in Benghazi. The last act of Ambassador Stevens was to meet with the visiting Turkish Ambassador. This event has not been publicized, investigated or highlighted as much as it should have been. The reason for the meeting was to make the final agreement on the shipment of arms collected from the streets and warehouses in Libya to Syria via Turkey. The arms were destined for the anti-Assad forces, but Al Qaeda wanted them to go to their fighters in Syria. Sending the arms against the will of Al Qaeda in Libya infuriated the terrorists, and may have actually been an additional spark for the attack on the consulate.

It may be important to repeat once again that the president’s and the State Department’s efforts to blame the attack on a silly anti-Islam video, which had not been even seen in Libya, was completely false and a total fabrication. It was done to protect those who grossly failed in their duty to protect our citizens abroad regardless of the reasons or situations. It was a classic case of a cover-up, which should make every single citizen of this country sick to their stomachs and never put irresponsible people in responsible positions ever again!

I will not repeat the gory events of the day on Sept. 11, 2012. A very significant day, the anniversary of the first attack on our country by terrorists when extra-ordinary measures should have been taken to protect ALL our citizens EVERYWHERE! And they were not!

An old Turkish expression states: “Fish start to stink from the head.” And stink from the head it did on Sept. 11, 2012. Yes, it has been more than a year since the event; yes, all kinds of usual promises to “find and punish the terrorists responsible” were made and not kept; yes, there will be other attacks as soon as we let our collective guards down; and yes, there will be irresponsible “journalists” of major newspapers who will write long and false reports going back to the “video” theory and try to rewrite history for political gains and ideological reasons.

All I am asking from my readers is to always check the facts. Never trust ideologically inspired politicians regardless of their party affiliations. Connect the dots, and always be on the side of the truth.