No Social Security Number, Identification or Home How did Danny Mootispaw get this way? 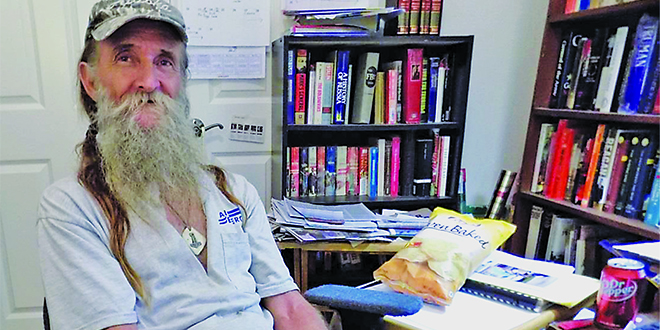 Photo by Barry Gwinn |Danny Mootispaw, 61, during an interview (2017). It’s not easy getting Danny to smile. Out of practice after years of trying to play the bad hand fate dealt him, he says his times with the author are the few times he feels like smiling, as no one else has ever listened to him.

Danny Mootispaw is now known to many Island residents. An October 27th article in the Coastal Breeze News, “This Judge has a Big Heart,” told the heartwarming story of a Naples County Judge and her bailiff going the extra mile to get Danny out of a tight spot. Since then he has been recognized and greeted by passersby, rather than ignored or cursed. Many have helped him out in other ways. He is emerging as a contributing member of the Goodland community. Nevertheless, he values his independence and is proud of the fact that he has never gone on a government dole, or asked for one.

Danny, one of seven children, was born in Greenfield, Ohio in 1956. His family moved to Naples, Florida in 1961, and he has lived in this area ever since. Having a photographic memory and an inquisitive mind, Danny can recite his lineage all the way back to Johan Mudersbach (and beyond), who emigrated to Pennsylvania in 1753 from a town of the same name in Germany. Mudersbach changed his name to Moodispaugh, which according to Danny has appeared with 72 different variations in spelling over the years, with Mootispaw appearing on Danny’s birth certificate. “I had ancestors who fought in every war,” Danny said, with obvious pride, “The most recent, being my brother Douglas who fought in Desert Storm.” Danny’s Uncle Gilbert, stationed at the Naples military supply depot during WWII (Mechanic, U.S. Army Corps) leased the base after the war and started the Naples Airport, Danny said. “Uncle Gilbert was my dad’s connection to Naples and the reason we came here after dad lost his Ohio job.”

Danny went through matriculations at Shadowlawn Elementary, Gulfview Middle, and Naples High School (NHS), finally being suspended from NHS and asked to leave at age 16. “I was a troublemaker at school,” Danny said. “I didn’t give them much choice but to get rid of me. I was OK with it.” He also pled guilty to a burglary charge during this period. Upon leaving school, Danny migrated to the Texas oil fields, where he worked until the oil embargo shut things down. Returning to Florida, he got a job at the shell factory in Goodland where he lived and worked for two years, cleaning and packaging shells. In 1979, he moved to Montana with the intent to become a game warden, but instead opened his own business. “I ended up being just a logger,” Danny said, “I bought a Husqvarna chain saw and contracted to cut down Douglas Firs, Lodgepole Pines and Yellow Pines.” Returning to Goodland, Danny became a certified locksmith, bought a home on Palm Avenue in

Photo by Barry Gwinn |1970s and 80s technology made producing counterfeit government documents easy. Shown from one of my FBI cases are counterfeit Social Security cards used by a notorious husband and wife team who traveled the southwest cashing counterfeit checks (circa 1970).

Goodland, and over the years, fathered seven children – four girls and three boys, ages 25 to 48. He claims 16 grandchildren, ages 3 to 25, none of whom he has seen for six years. His six greatgrandchildren, ages 3 to 9, he has never seen. He was all set to settle down, having a driver’s license, a social security number and all the identification he needed. Then in 1983, he got the wanderlust again and moved to Phoenix, Arizona where one of his brothers was living. Danny worked as a mechanic and built stock cars there. That’s where Danny’s troubles started and quickly exploded out of control.

Danny says he lost his wallet in his Phoenix trailer park, and soon the nightmare began, horrors which recur to this day. “My Montana drivers license was in that wallet,” said Danny, “It had my date and place of birth and my social security number. Montana used social security numbers as the DL number.” In 1986, he got a letter from the Gallipolis, Ohio Police Department, advising him that they had issued a warrant, charging him with hit and run, resisting arrest, battery on a police officer, and failure to appear. “I wrote back and told them I had never been in Gallipolis, but they never replied,” Danny said. Gallipolis, as it turns out, is just 88 miles from Greenfield. Letters notifying Danny of additional charges soon began arriving. They were sent from agencies in at least 14 states, from Hawaii to New Jersey.

Danny wrote to most of them and visited those that he could. He has kept copies of everything, contained in a two-inch thick, dog-eared manila folder. His appeals invariably started out with the words “Please help.” No one ever did. It was too complicated. Then in 1995, when applying for a renewal of his Arizona driver’s license, he was arrested by the Phoenix Police Department and charged with using a false name on a driver’s license application. The name he had used was Danny Allen Mootispaw, Date of Birth 1/24/56, Place of Birth Greenfield Ohio, the same name and information on his birth certificate. The case was nolle prossed, but his license taken from him. “[The Phoenix PD] said they had a record of 86 DUIs in my name,” said Danny, “I have never taken a drink [of alcohol] or used illegal drugs in my life.” Danny provided a dozen names of persons he believed were using his driver’s license information, one of which was his brother, an alcoholic who was also living in Phoenix at the same trailer court. To his knowledge, nothing ever came of it. It got worse. The Payson, Arizona 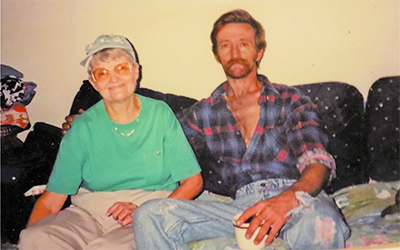 Submitted Photos |Danny Mootispaw, 40, with an aunt in Phoenix, Arizona (1996). A period of frenetic activity as Danny tried to stem the tide of a flood of arrest reports of persons using his identification.

sheriff’s office was investigating three people who had been using Danny’s SS# for illicit purposes. The Payson police gave Danny the names, ages, and most recent addresses of these persons. Two lived in Texas; one lived in Phoenix. Danny was unable to run them down. Danny spent a lot of time trying to unravel this opaque morass, to no avail. In 1996, back in his home state of Florida, Danny was arrested for a second time, while applying for a driver’s license. He was charged with fraud in attempting to procure a license. In other words, he didn’t appear to be who he said he was, and could not prove otherwise. The case was later dismissed, but it left Danny without a license, and no means of getting around the county (except for his battered bicycle).

In 2000, and in desperation, Danny turned to the federal government. Without an appointment, he “barged” into the Golden Gate office of Congressman Mario Diaz-Balart, blurting out his frustrations and ultimately moving the congressman to arrange for a “diplomatic” drivers license. The license expired in 2011. “Renewing it would have been futile,” said Danny, “It just would have involved more hassle. Besides I didn’t have the $31 renewal fee.” With no means of employment, and no social support, Danny says he has had to get by on less than $100 a year. Danny did manage however, to get a Florida identification card, but said that it was confiscated by a Collier County deputy sheriff when he was walking along San Marco Road. Danny with his long beard, dreadlocks and pigtails is hard to miss. “The deputy told me that the information on the card misrepresented who I really was,” said Danny, “He said he was authorized to take it from me.” Danny managed to get another card, but said that this too was confiscated in the same manner. Danny says he has no ID right now, his passport having been lost when his boat was stolen in 2008. Danny says that he can’t apply for another, because he has no ID and can’t prove he is living in the U.S.

As for Danny’s Social Security (SS) number, Danny says that he was initially issued the same number as his older brother, Don. When the error was discovered, some 20 years after the fact, Danny and his brother went into a local Social Security office, where Don retained his number and Danny was issued a new one. This new number was the one used on his Montana driver’s license as his license number. It was subsequently used in fraudulent transactions by at least three other persons, whom Danny believes may have 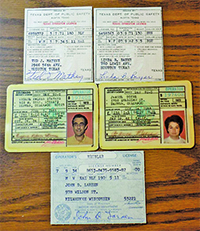 Photo by Barry Gwinn |Counterfeit driver’s licenses used by a husband and wife team in a southwestern U.S. crime spree, c. 1970. Shown are Texas, Colorado, and Wisconsin licenses. Blank forms were obtained from contacts in the state DMV office, information was typed in, and when necessary, photos superimposed.

paid for the information. The final indignity came in 2013, when Danny says he went into the Naples SS office to pursue a disability claim relating to a bad case of shingles. “Instead of helping me, they confiscated my SS card, told me that it had been canceled, and threatened to have me arrested if I ever tried to use it again,” said Danny, “They escorted me out of the office.” So, says Danny, “I am not me. I am somebody else.” Last February, Danny asked the U.S. District Court in Ft. Myers to address his lack of a SS number. He was there in response to a summons from the U.S. Fish and Wildlife Service charging him with illegally living on a boat in Goodland Bay. It was a four day round trip for Danny on his bicycle, sleeping in woods along the way. He says the court dismissed the charges but declined to address the SS situation. It was too complicated the judge said.

Danny’s meticulous record keeping has convinced me he is telling the truth. The FBI offers additional evidence to back up his bizarre story. In 2011, Danny obtained a copy of his FBI rap sheet. I know a little something about FBI rap sheets. Every time an arrest is made by a local police agency (including DUIs), the subject is fingerprinted and the prints are sent to the FBI’s Identification Division with a request to forward any additional records for the person arrested. Danny did indeed have a rap sheet, but it reflected that only one agency, the Collier County Sheriff’s Office, had ever submitted his fingerprints – once in 1973, on an arrest for burglary as a teenager, and again in 1996, after an arrest for alleged fraud at a local DMV office when Danny was trying to get a Florida driver’s license. The FBI listed 14 states as having sent in fingerprints of a person arrested using Danny’s name and DOB. Tellingly, the Bureau did not record any of these arrests on Danny’s rap sheet. There is only one explanation for this – the submitted fingerprints were not Danny’s. The nationwide use of Danny’s biographical information, in my opinion, could only have resulted from the wholesale selling of this information. According to Danny, his brother Dale, a prime suspect who is an alcoholic and was his neighbor in Phoenix, is presently incarcerated in Ohio – for DUI.

Next edition – Life aboard Danny’s boat.