Night of Lights on Marco 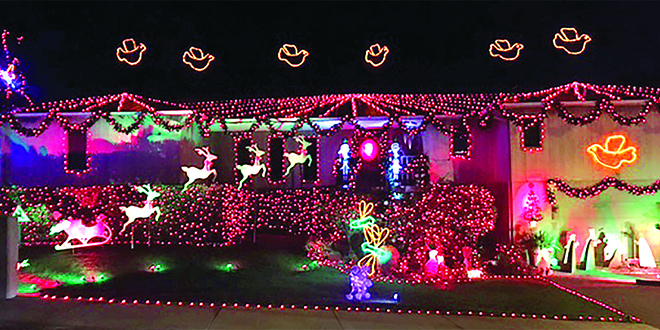 The final night of fun began with tailgating at Centennial Bank. Burgers were flaming on the grill as the committee arrived and the wine was poured for all guests attending. Chairman Dave Rice and the CHBDC embraced the honored guests of the evening, CEO of LCEC Dennie Hamilton and his wife Pricilla. Having sponsored the event for the last 20 years, it was their first time riding on the trolley. They were both grateful for such warm welcomes and excited to see how the local islanders have decorated their homes. Once leaving the bank, the committee was hyping up their favorite houses they were excited to check out. Festive holiday tunes blared through the speakers as the decorated trolley drove through the beautiful Island, spreading holiday cheer on every street corner. More than 15 cars followed behind the trolley at all times in hopes to witness the new 2016 champion. 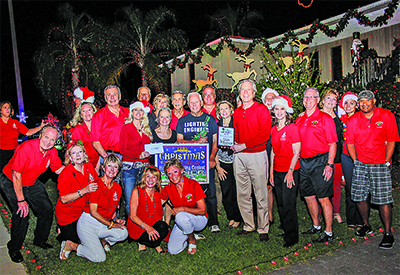 The committee all pose in front of the winning Winterberry home, making sure to not step on any of the lights!

with the judging committee dividing the Island into nine geographic areas with nine teams of volunteers who travel through every road. With over 2000 houses decorated this year, the contestants must turn their lights on nightly throughout the three-day judging process.  The volunteers and judges delegate who will make the final list. The initial judging process was completed December 12 – 14 between the hours of 6:30 – 10:30 PM. Previous winners are not eligible to win again for a five-year period. This encourages all islanders to participate in a festive tradition. Even if they do not win the title, they will still be recognized amongst the best.

With the “top 10” finalists recognized, the committee left the Marco community in suspense for who will take home the winning title. This promotes a little friendly neighborhood competition, “It’s so great seeing our community getting so involved.” Committee member and judge Sandy Dauch said. “We want everyone on the island to know they are encouraged to LIGHT UP the night sky and participate.” The overall winner receives a cash award of $250, a yard sign and the official winner’s plaque.

Every home lit up was as distinctive as their owner and street name. Each of the decorated homes displayed unique representations of Santa Claus and his reindeer, snowmen, twinkly lights and even sting ray outlines in palm trees. But as the 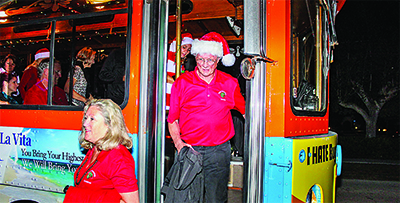 The Decorative House committee members all exit the trolley from a night of judging. Next stop: The after party!

night went on, it became more and more clear who the winner was going to be. The judges were won over by our Winterberry contestants. The crowd cheered louder in that moment than the other 9 houses combined. This house literally stopped traffic as the award was presented, having all of Marco cheering in excitement.

After awarding Jim and Pamela Raiser as the 2016 House Decorating Winners, handing their prize and lawn sign, the entire judging committee posed for a group photo on the lawn. “We’ve been planning and decorating since before Thanksgiving.” Jim said. “It’s an honor to win this title.”

Making sure to not step on any of the lights on the way out, judges boarded back onto the trolley as it slowly made its way back to the bank. While the judging process was finally over, the party was nowhere near finished. An after party was being held at a private residence in Caxambas to continue the celebration. “Our favorite part of the night was getting to award the winner personally.” LCEC CEO Hamilton and his wife commented. “Each finalist was spectacularly unique.”

With a superb judging committee, honored guests and contestants becoming more and more creative as the years pass, this event was the perfect way to kick off the final Christmas countdown. To find out more information and sponsorship availability for next year’s competition contact Chairperson, Dave Rice at marcodave@comcast.net