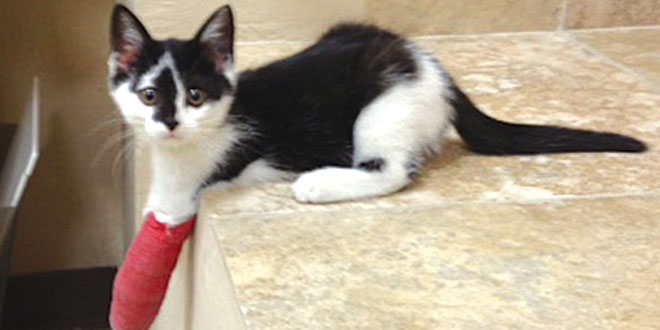 FOR THE LOVE OF CATS

Dear fellow felines: It is imperative that I caution you about an upcoming human tradition that spells bad news for those of us who share “their” world: the dreaded New Year’s resolution.

The number one resolution going into 2012 was to lose weight, or so states the website Statistic Brain. Adding to the belt tightening promised by this stat is a recent article in the Wall Street Journal (December 18) admonishing cat (and dog) owners to utilize “interactive feeders” designed to keep us from inhaling our food while simultaneously making us expend more energy. This article further stated that the number of overweight cats has jumped 90% in the past five years.

This brings us to that old diet and exercise conundrum humans resort to after their previous year’s resolutions have failed. And guess what? Us felines get to suffer alongside them until they forget about their silly plans to lose weight. I myself love food, but the folks here at the shelter put me on a diet many moons ago. And if I must say so myself, I am looking rather svelte these days. But I still heartily encourage the shelter kitties to slip me some of their food. It’s a 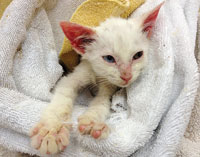 Spirit, sad and sick on her arrival to FLC. SUBMITTED PHOTOS

nice arrangement, but please don’t tell Jim and Jan; they hold me in such high esteem.

So be forewarned, in the days to come your owners will put many of you on diets and insist you struggle with smart toys that you must bat around  in order to make the food and treats fall out. Talk about your starvation diet!

As we head into the new year, however, my staff of 70 feels that we should adopt positive attitudes rather than dwelling on food rationing. Towards that end, I promised I would share with you two of the shelter’s most incredible 2012 rescue stories: that is the story of Spirit, a stowaway saved by an alert motorist; and Josephina, another stowaway saved by an equally alert family.

At just five weeks of age, Spirit found herself orphaned and homeless in Naples. She thought she had found the perfect home in the wheel well of a truck. And life was relatively good until the owner took a drive, hit a speed bump, and propelled the kitten into the air and onto the road. Miraculously, her guardian angel saw to it that she was saved by an alert driver.

Hours later, the shaken and rattled feline arrived at our shelter where I immediately took over her life. And 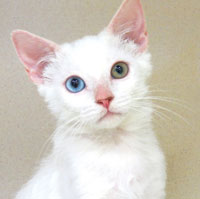 Spirit is now happy and healthy at her new home.

what a sad little life it was. Dehydrated and near death, the poor thing was covered with fleas, skin fungus, and mange. In addition, her back legs were burned from the heat in the wheel well.

Thankfully, our founder – Jan Rich – came to the immediate rescue as soon as I briefed her on the situation. After a few nights of sleeping next to Jan’s soothing heartbeat, the nearly bald kitten overcame her diarrhea and started healing from her burns and other skin afflictions. Naturally, I monitored her progress daily to make sure the shelter staff was doing its job. And, to be honest, I was captivated by her unusual bi-colored eyes:  one blue and one brown. My staff and I named her Spirit because of her “purrsonality” and overwhelming will to survive.

After a couple of months, Spirit was ready for adoption so off to Petsmart she went.   Not surprisingly, within an hour she was adopted by a wonderful family and hasn’t stopped purring since. I love a happy ending, don’t you?

Then there is the story of Josephina who came to us after being seriously injured by a fan belt when she took shelter in a jeep engine. It took 30 stitches to close the horrible gash on her right shoulder. In

Kitties – remember to stay out of the dryer! It’s dangerous.

addition, her left leg was pinned against the engine and sustained severe nerve damage, resulting in a loss of feeling from her shoulder to her toes. Over the past several months we have seen the nerves regenerate to the point where she now has feeling down to her elbow.

Some of you may have met this exuberantly happy and loving survivor at FLC’s booth during the City’s 15th Anniversary party at Mackle Park last month. She was the one with the very cool pink cast on her left leg, designed to promote nerve healing. Sadly, Josephina may need surgery – to the tune of $2,000 – to fuse her wrist so she has unencumbered mobility and an awesome quality of life. The worst case scenario is to have her left leg amputated, an option we all vigorously hope can be avoided.

So here’s Jan’s and my New Year’s resolution: surround yourself with love; it has the power to heal. And for all of you heat seeking felines, please stay away from car engines, truck wheel wells and clothes dryers.

Naomi is a 4 year old Tortie and a permanent resident at FLC.  She is the shelter supervisor and takes her salary in food. She would love for you to learn more about For the Love of Cats at its website, www.floridacatrescue.com