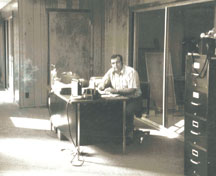 Only a couple businesses have served the island continuously since 1969 and Condee Cooling and Electric is one of them. They’ve served Marco Island and surrounding areas for 42 years.

Originally from Illinois, the late Don Condee, Sr., a licensed pilot, found Marco Island in the 1960’s while flying back and forth from Illinois to Florida with friend, Ed Husted. Ed worked for Deltona. In 1965 Don, Sr. purchased Marco property and a condo in Emerald Beach. At that time, Don, or Senior as the employees affectionately called him ran a business in Illinois which provided propane gas, electrical, refrigeration, heating, and air conditioning services. Seeing the need for similar services on Marco Island, Senior asked long-time employee George Hess (service manager till a fatal motorcycle accident in1999) if he’d like to move to a warmer a climate and George agreed. George moved to Marco Island bringing one truck from Illinois.

Thus, Condee Cooling was born in 1969. According to Donald “Erik” Condee; the third generation with Condee Cooling, “Deltona was building homes and condominiums at that time. However, their unionized service department was not available to provide 24 hour mechanical

Don Condee, II the second generation with Condee Cooling, was still in college when Senior made the move to Marco Island. Don ran the company in Illinois until 1979. “My dad called one day and said he needed my help on Marco. So, I made the move with my wife Donna and infant son Erik.”

Condee Cooling and Electric’s first office was located adjacent to the old 7-Eleven (currently Kretch’s Restaurant) on Bald Eagle Drive. In 1971, the business was moved to their new building on Marco Lake Drive. In 1979, the business, which included 12 employees, was again moved to their new, larger warehouse and office space on Front Street while retaining the Marco Lake Drive property for warehouse needs. “We’d been in those offices since 1979,” said Michelle Reynolds, a Condee employee for 21 years. “You couldn’t back your chair up without hitting the person sitting behind you. We outgrew that space 15 years ago. So, this current move is long overdue.” 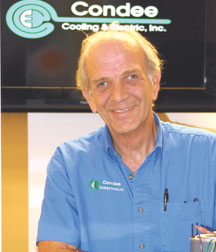 office space, something that had been in the design and planning stages since 2003. “Originally, we had plans approved in 2004. Every time we got close, we realized we had either already outgrown the plans or they didn’t include room for future expansion. We redesigned at least half a dozen times to accommodate our growing business which currently includes over 50 employees,” commented Erik.

In 2009, they purchased and began renovating the building where the new office complex sits. (This site was formerly 23 Front Street restaurant, Alan’s Hideaway, and most recently Scooter Town Bike Rentals.) The new building will officially open on Thursday, January 12th with a ribbon cutting at 6:00 PM.

The renovated building has offices downstairs which includes customer service, sales and parts. The offices are independently climate-controlled with an advanced digital security system and programmed lighting systems that track movement. The building also includes three small employee apartments and training facilities upstairs. “Instead of holding training classes in the warehouse, we now have a space conducive to learning with an updated projection system,” Erik explains.

The address will remain 25 Front Street (the buildings have been renumbered). The old office will be

converted into warehouse space. According to Erik, “The goal is the same as it was 43 years ago-we’re here to serve you.”

Condee Cooling and Electric has touched many lives over the years, growing from one to 50 employees. The family working in the business extends from both Don Sr and wife Mary Lou to employing son Don II, grandson Erik, daughter Charlotte and her husband Harry, son Brett Reynolds, daughter in-law Michele and her daughter Mary Beth. Family as well as many of the employees, have been with the company 15, 20, 30 years or more. The longevity of employment is an indication of the impact they have had on the lives of their employees, their families, and community in general. As an example, Greg Schneider has been with the company for 37 years and is known to some of the charitable organizations for handling electrical needs for local events. Their managers Bruce Barnett, Rene Simon, Ed Walsh, and Terry Chapin have all been with the company many years. Debbie Lee has been with the company for 31 years and is joined by her son Cody as an employee with Condee. Jeff Pratus is 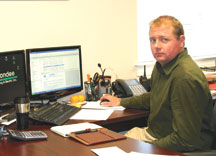 joined by his son Jonathan, also working in the company. Jeff looked around at his fellow employees and said “This is our family.” Imagine the number of local families Condee has supported over the years.

Debbie Lee commented, “We’ve seen generations of customers. Originally customers were people who came here to retire. After a number of years, we dealt with their children and now we are in the third generation of some of those customers.”

Don, II, said, “When we moved here, Emerald Beach was the only condominium on the island. There were only 300-400 permanent residents. Part of our success is that we’re local; our employees are local, and people know they can trust us. Condee Cooling and Electric is proud to be a part of this community and to have grown with it.”

The grand opening reception will begin at 5:30 PM Thursday, January 12th with the ribbon cutting at 6:00 PM. Don Condee, Sr. passed away last December at 82 years of age. An office in the new building is dedicated his memory and one of his prize catches, a 6 ft. sailfish, is mounted on the wall. The new building reflects Senior’s motto, “The Condee Man Can!”