New Walk to Run Program at the Y

Personal trainer Maddy Wyers brings enthusiasm and a ready smile to her new job at the Greater Marco Family YMCA (Y). She is spearheading a new program, the Marco Walking Club, which embraces walking, jogging and running.

Wyers says the aim is to attract people of all levels and ability at the two sessions. On Fridays, the group meets at 6:30 AM at the Walgreens on North Collier Boulevard and is aimed at people of all ages who want like to burn some calories before heading to work. The Tuesday group, aimed at runners, meets at 8 or 9 AM at the Y on Sand Hill Road.

The 19-year-old Wyers, who grew up in northern Ohio and moved here about six months ago with her parents, is straightforward about her reasons for being fitness and health conscious. “I was overweight,” Wyers says. “I lost 40 pounds and that was my starting point. Eventually, I found that I got into a routine that I couldn’t imagine not doing.” 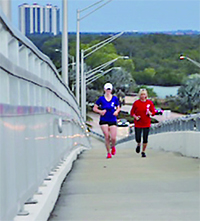 that field in October 2015. She is also attending Florida Gulf Coast University.

Wyers first became involved with the Y after meeting Healthy Living Director, Deborah Passero, who is also the Y’s physiologist and an ardent supporter of healthy living. “We talked about goals and (Deborah) found a place for me,” Wyers says.

Joining Wyers on the most recent bridge jog/walk session was Y CEO Cindy Love, who said the idea of the Marco Walking Club arose from a chat with islander Christine Neal. Neal told her about a program she participated in when she lived in the north called Walk to Run. “We decided to walk together twice a week, depending on whether we had meetings,” Love said. Deborah Passero found out, then Maddy Wyers came on board. “(W)e took off with the idea (for) this program,” Love explained.

Costs for the Tuesday and Friday sessions are $10 for Y members and $15 for non-members. Personal training fees vary.

For more info about the Marco Walking Club and the Y’s other programs and activities for youth and adults, call membership at 239-394-3144.