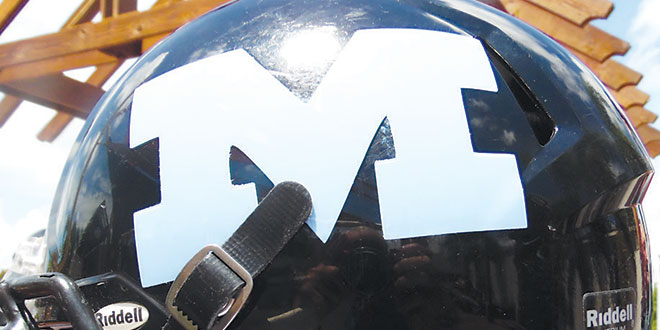 Marco Island Academy football gets into swing when the Rays travel to Tyler, Texas to play in a football weekend showcase on August 28.

Heading into its fourth season, the Marco Island Academy Rays football team is looking to put major stings to its opponents.

Coach Greg Fowler, in his second season, expects his team to be competitive in every game.

Taking a page from the Naples and First Baptist Academy’s play books, they, too, will play an out-of-state team to open its season. And it won’t be home cooking.

The Rays will travel to Bullard, Texas to play in the 2015 Brook Hill Football Classic. Game time 7:30 PM, on August 28. Their opponent, Edgewood, Texas High School.

The Rays began its season on Monday with its first practice. Fowler’s team moves up a notch in Florida play, moving to 3A. It puts them against some very strong competition, including First Baptist Academy, St. John Newman and Community School.

“We are bigger, stronger and more

experienced,” Fowler said. “We look forward to competing at a higher level. If we stay healthy, good things will happen for us in the fall.”

The uniforms were provided by the MIA Touchdown Club. The club also has provided a hydration system, knee braces for the linemen and video equipment for game use.

Wayne Purvis, club president and Michael Hook, treasurer, were on hand for the unveilings.

“It is great that the community has come together to support these young athletes,” Purvis said.

The club was founded to provide resources for athletics at the school. Hook said the club is looking to provide funds for other MIA sports.

schools, equipment and support for charter school athletic programs must be raised from private donations, rather than public [school] funds,” Hook said.

Jane Watt, founder and school board chairman is “very excited as we continue to get support from the community.”

Monnot will continue to head the girls volleyball team that made it into the 2A volleyball playoffs for two straight years.

Two new teacher hires by Monnot who will serve as coaches are Sandi Castillo, an assistant coach for cross country and Michael Weyrauch, head coach for track and field. Castillo will teach English and Weyrauch history.