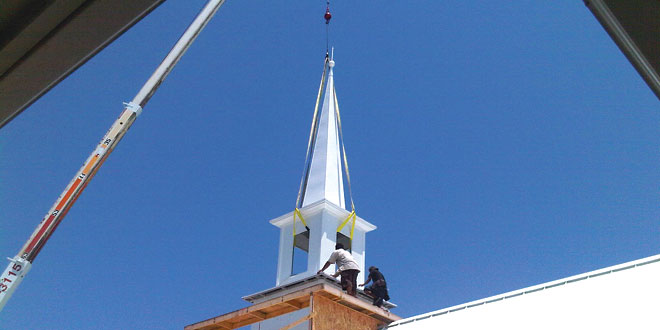 The congregation at the United Church of Marco recently replaced its 40-some year old steeple, and it was a sight to be seen. Many Marco residents noticed as the original steeple came down and the all-new, aluminum-clad replacement was raised to its new home atop Disseler Hall.

What was originally thought to be an easy fix of some leaks caused by the steeple quickly turned into the realization that the former had reached its life cycle. While hoping to keep the original look of the church, Dan Osborne of DCSM, Inc. of Naples worked with the congregation to rebuild a new, sturdier structure.

The old steeple comes down to make way for the new. Photo by Val Simon

place, and atop a new metal roof replaced in 2012, Disseler Hall should be safe from water leaks for years to come. Disseler Hall is a meeting place for many organizations within the church as well as outside. The successful Marco Island Shell Club meets there in season and other clubs also utilize the space.

Built in the 1970’s, the United Church of Marco is heavily involved in helping the needy. Many of its members volunteer diligently for Habitat for Humanity, and the church also runs the Bargain Basket on Marco Island, of which proceeds go to charity.

To learn more about the church, its offerings and its congregation, visit www.ucmarco.org.